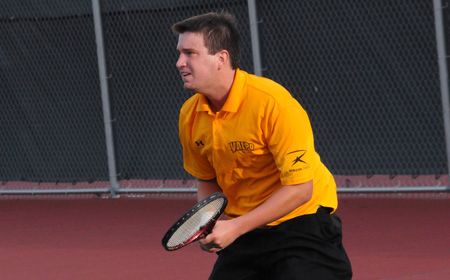 “I was really proud of the guys today,” head coach Jim Daugherty said.  “We definitely competed and played big points better than we did last weekend (at Purdue).”

In singles play, Ball State (2-1) swept all six matches in straight sets, but not before having to face several second set tie-breaks.  Litscher battled Bussert before falling 6-1, 7-6 (7) at number three while Baum fell 6-4, 7-6 (5) against Doherty at the fourth spot.  Whitmer suffered a 6-4, 6-3 setback against Cliff Morrison at the top of the lineup while DeHerrera dropped a 6-2, 6-3 decision to Carpenter at the fifth spot.  Siddarth Mehta (South Bend, Ind./Clay H.S.) fell to Thomas 6-2, 6-4 at the bottom of the lineup while Stump had to retire due to injury in the second set against Albertin while trailing 6-2, 3-1.

“The guys came back and hung tough in several sets after falling behind early,” Daugherty concluded.

Valparaiso (0-1) will have a week off before heading to Kalamazoo, Mich. for a pair of matches next weekend, beginning next Friday with a 5 p.m. CST contest against Dayton.