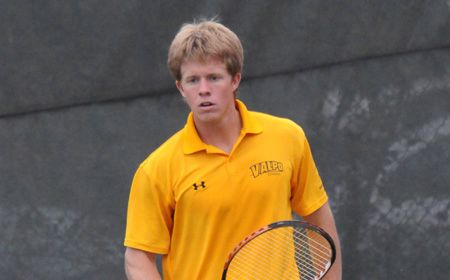 Valparaiso played its first nationally-ranked opponent of the season on Saturday afternoon, and was defeated by #75 Western Michigan 7-0 at the West Hills Athletic Club in Kalamazoo, Mich.

“Despite the score, we fought to the bitter end and there was a lot of team support today,” head coach Jim Daugherty said.  “It was a team effort overall against the toughest team we’ve faced all year.  This matched really pulled us together in many ways.

The Broncos swept all six singles matches in straight sets and won all three doubles contests.

In singles action, Noel defeated Baum 6-2, 6-2 at number three to start the scoring before Whitmer fell to Michael Colderone 6-1, 6-4 at the top spot.  Olivarez clinched the match at the second spot with a 6-2, 6-2 victory over Litscher.  Montasser added a 6-3, 6-2 win against DeHerrera at fourth singles while Thomas Calderone topped Woodson 6-2, 6-4 at the sixth spot.  Michael Basha defeated Siddarth Mehta (South Bend, Ind./Clay H.S.) 6-4, 6-4 in the final match of the day at fifth singles, which also turned out to be the closest.

“Our level of play has definitely gone up since the beginning of year, especially in doubles” Daugherty added.  “We gave a great effort against a good team and we will be able to take a few things from this match that we will be able to improve upon.”

Valparaiso (1-2) will return to the courts next Saturday evening in Indianapolis, Ind. with a 5:30 p.m. CST match against IUPUI.