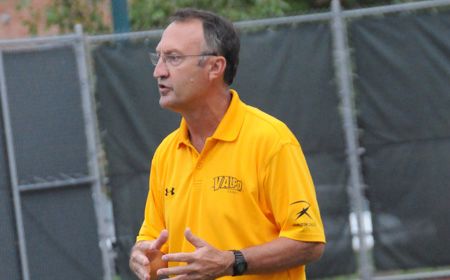 Chris Baum (Charlotte, N.C./Providence H.S.) earned a victory at fifth singles for Valparaiso, but the Crusaders dropped a 6-1 decision to Toledo on Saturday evening at Laurel Hill Racquet Club in Toledo, Ohio.

Baum registered a 6-4, 6-3 victory over Bryant Dudzik to pick up his second win of the season.  Kevin DeHerrera (Littleton, Colo./Chatfield H.S.) forced a tie-break for the third set at number six singles before falling 4-6, 6-3, 11-9 against Leonardo Henriques.

“Chris really stepped up his game midway through the first set,” head coach Jim Daugherty said.  “He was down a break 3-4 and fought back to turn the set around as well as the match.”

The Rockets opened the match sweeping all three doubles matches for the day’s first point.  Likitkumchorn and Elezovic defeated Litscher and DeHerrera 8-3 at first doubles while Burus and Sarria topped Whitmer and Baum 8-4 at the second spot.  Dudzik and Terence Weigand added an 8-7 (4) victory over Stump and Deihle to round out the lineup.

Valparaiso (1-4) will have nearly a month off before returning to action on March 7 against Creighton to begin its spring trip in Orlando, Fla.