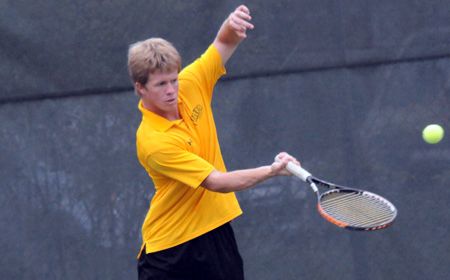 Valparaiso began its week-long trip in Orlando, Fla. on Sunday afternoon, but suffered a 6-1 setback to Creighton at Star Island.

Chris Baum (Charlotte, N.C./Providence H.S.) posted wins in both singles and doubles for the Brown and Gold, but Valpo dropped three three-set matches in singles play.

“Chris had a great day for us winning decisively in both singles and doubles,” head coach Jim Daugherty said.  “Lately he’s been the rock of the team coming through strong.”

Baum, who has won back-to-back singles contests, defeated Kyle Obermeier 6-4, 6-1 at number four singles to give the Crusaders their lone point of the day.  He also teamed with Adam Whitmer (Shipshewana, Ind./Westview H.S.) at number two doubles for an 8-3 triumph over Obermeier and Gabe Nagy.

Valparaiso (1-5) will return to the courts on Tuesday for a pair of matches.  The Crusaders will face Boston University at 7 a.m. CST before taking on Connecticut at 5:30 p.m. CST in Orlando.