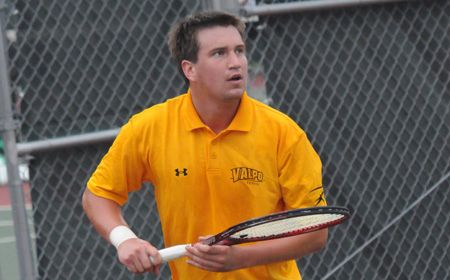 Tom Litscher was a winner in singles and doubles against Fairfield. (Ray Acevedo)
Related Links

Valparaiso picked up singles victories at three, five, and six on Tuesday afternoon, but it was not quite enough as Fairfield defeated the Crusaders 4-3 at Rollins College in Orlando, Fla.

In a closely contested match, Fairfield (4-4) took two of the three doubles contests to win the opening point.  Valpo started with a victory at three doubles as Tom Litscher (Eau Claire, Wis./Memorial H.S.) teamed with Arne Deihle (Reutlingen, Germany/Johannes Kepler H.S.) for an 8-5 win over Mark and Erik Kremheller.  The Stags won at number one with Rob Ferrante and Joe Michalisin topping Kyle Stump (Plymouth, Ind./Plymouth H.S.) and Kevin DeHerrera (Littleton, Colo./Chatfield H.S.) 8-6.  In the deciding second doubles contest, Adam Whitmer (Shipshewana, Ind./Westview H.S.) and Chris Baum (Charlotte, N.C./Providence H.S.) had a match-point, but could not pull out the win, falling in a tie-break 9-8 (3) against Ryan Berthodt and Dan Sauter.

“This was a very tough loss for us with lots of close matches,” head coach Jim Daugherty said.  “I feel a lot better than I did after yesterday though because we played well.  We were literally one point away from winning the match.”

Litscher also posted a singles win for the Brown and Gold in addition to his doubles triumph, defeating Bob Kelly 6-3, 6-2.

The Stags won at one, two and four though to take the match.  Sauter was a 6-2, 6-4 victor against Stump while Michalisin downed Whitmer 7-5, 6-2.  Erik Kremheller defeated Deihle at number four singles by the same score.

Valparaiso (2-7) will close out its spring trip on Wednesday morning with a 9:30 a.m. CST match against Monmouth in Orlando.