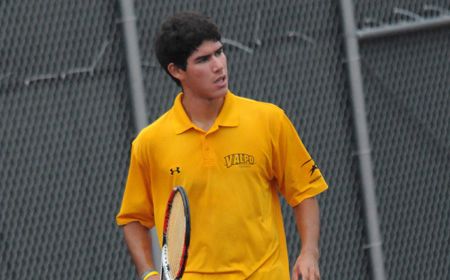 Playing their final match of their spring trip in Orlando, Fla. on Wednesday morning, Valparaiso’s men’s tennis team suffered a 5-2 loss against Monmouth at Lake Cane.

The Hawks won a pair of three-set matches in singles play which proved to be the difference in the match.

Valpo started the match with a win at number three doubles as Kevin DeHerrera (Littleton, Colo./Chatfield H.S.) and Michael Woodson (Raleigh, N.C./Ravenscroft H.S.) eanred an 8-3 victory over Ben Dashiell and Oliver Grimbly, the duo’s second straight win as partners.  Monmouth (3-6) won both of the other doubles contests though to take the day’s first point.

Valparaiso (2-8) will have 10 days off before beginning Horizon League action on March 20 in Green Bay, Wis.  First serve is set for 10 a.m. against the Phoenix of the University of Wisconsin-Green Bay.