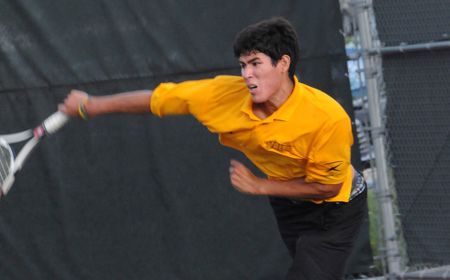 Valparaiso’s men’s tennis team opened the home portion of the 2010 spring schedule on a warm Friday afternoon, picking up its first Horizon League victory of the year 4-3 against Youngstown State at the Valpo Tennis Complex.

Valpo added to its advantage right away in singles as Litscher cruised to a 6-0, 6-1 win against Leson at the fourth spot.

“Tom has been playing really solid the last week or so for us,” head coach Jim Daugherty said.  “He is stepping up like a senior should do.”

DeHerrera made the score 3-0 Crusaders after his team-leading eighth singles victory, defeating McElroy 6-1, 6-0 at the sixth spot.  The Penguins fought back though, cutting the lead to one.  Emig downed Deihle 6-4, 6-2 at number five singles before Ismail won in three sets against Whitmer 6-3, 2-6, 6-1 at the top of the order.

Baum secured the win for the Brown and Gold with a come-from-behind three sets win at the third spot, beating Hamning 5-7, 6-3, 6-2.  Rosa earned Youngstown State’s final point with a win over Stump at number two singles, 7-6 (6), 6-0.

“It is great to get the first league win of the year,” Daugherty said.  “We will now be looking to carry the momentum into tomorrow and the next couple of weeks.”

Valparaiso (3-10, 1-2) will return to action on Saturday at 1 p.m. as the Crusaders host Cleveland State.  First serve is set for 1 p.m. at the Valpo Tennis Complex.