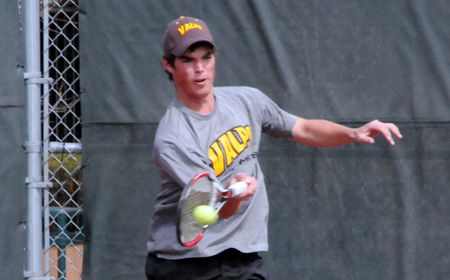 In a highly competitive men’s tennis match on Friday afternoon, Valparaiso came up on the short end of a 5-2 score against UIC at the Valpo Tennis Complex.

The Flames extended the advantage to 2-0 when Lystad defeated Whitmer 6-3, 6-2 at the top of the singles lineup, but the Crusaders continued to battle.  Baum cut the deficit in half at third singles for the Brown and Gold with a 6-2, 6-2 victory over Bastan Harbo.  UIC won the next two decisions though to earn the team victory.  Kirk was a 6-2, 6-4 winner against Litscher  at number four while Gonzaga topped Stump 6-0, 6-4 at the second spot.  Valpo earned another win at five as DeHerrera bested Shepardson 6-3, 6-7 (5), 10-7, but the Flames won the final match at sixth singles in three sets as Giraldo defeated Siddarth Mehta (South Bend, Ind./Clay H.S.) 6-2, 1-6, 6-3.

“It has been tough being on the brink of winning so many matches both individually and as a team yet coming up empty,” head coach Jim Daugherty said.  “We have to find a way to convert on the key points and moments in the matches.”

Valparaiso (3-12, 1-4) will continue its season-ending homestand on Tuesday afternoon, stepping out of conference action to host Chicago State.  First serve is set for 3 p.m. against the Cougars at the Valpo Tennis Complex.