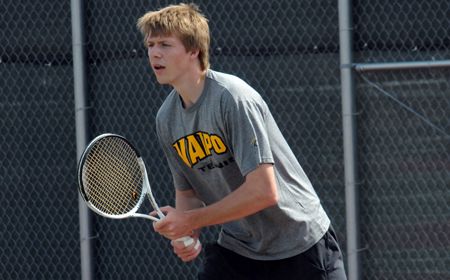 Valparaiso rallied with four singles victories after dropping the opening doubles point to defeat Wright State 4-3 on Saturday afternoon at the Valpo Tennis Complex to keep its hopes alive for a spot in the 2010 Horizon League Championships.

“I’m really proud of this team for digging extra deep and coming up with a must win today,” head coach Jim Daugherty said.

Valpo started to rally in singles, winning the first two matches.  DeHerrera took the first set from Alafriz 6-0 and was up 2-1 in the second before the Raider retired at the fifth spot.  A retirement by Dredge, trailing 6-3, 5-0 at number four gave Litscher the victory and the Crusaders had a 2-1 lead.

The Raiders retook the lead as Camilleri downed Whitmer 6-2, 6-3 at the top spot and Landon Neuman defeated Stump 6-3, 6-4 at number three singles.  Baum tied the match though, defeating Waldhausen 6-3, 6-4 while playing at number two singles for the first time this year to set up the deciding match.

“Hats off to Chris,” Daugherty added.  “He continues to win even moving up in the lineup.”

Valparaiso (4-12, 2-4) will look to secure a spot in the Horizon League Championships Sunday afternoon, hosting Butler at 1 p.m. at the Valpo Tennis Complex.