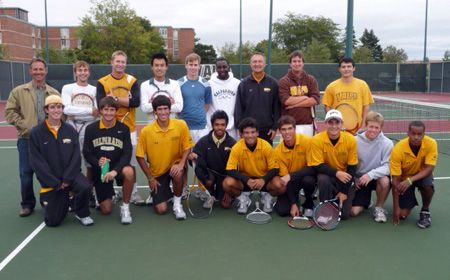 The alumni and current team came together for friendly competition on Homecoming weekend. (Jim Daugherty)

In a tightly contested contest, the Valparaiso University men’s tennis team defeated their alumni counterparts 5-3 on Saturday afternoon at the Valpo Tennis Complex in the annual alumni tournament held as part of Homecoming weekend.

“It’s always fun to see the alums return for this event,” head coach Jim Daugherty said.  “We didn’t have as many this year as in the past, but the competitiveness came out in both the current team as well as the alumni, like it does every year.”

The match was evened at two as Baum defeated Kooyers 8-3 to start singles, only to see the alumni take a 3-2 advantage when Vrabel defeated Kyle Stump 8-6.  Whitmer tied the contest at three with a win over Bukowski 8-6 and the current team took the final two matches to earn the win.  Woodson was an 8-5 victor over Venegas while Carlton Lyons defeated Jay Adams (2001-2004) 8-6.  Eric Honert and Lau battled to a 6-6 draw when rain stopped the match.

The current team returns to action on Friday and Saturday (Oct. 1-2) hosting the Valparaiso Fall Invitational at the Valpo Tennis Complex.  Action begins at 10 a.m. on Friday.