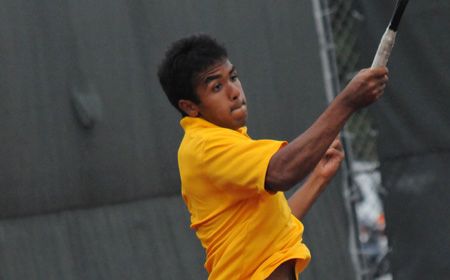 Despite a late start due to rain, plenty of matches were contested on Saturday as the Crusaders completed competition in its own Valparaiso Fall Invitational held at the Valpo Tennis Complex.

“Overall our play was pretty good this weekend,” head coach Jim Daugherty said.  “At the same time the tournament also uncovered some weaknesses that we need to work on as we move forward towards next week’s event.”

Carlton Lyons (South Bend, Ind./Clay H.S.) continued his strong play for the weekend with a 6-1, 6-1 victory over Brandon Tilton of Lewis in his first match of the day.  He then led Matt Heidenfelder of Lewis 6-2, 2-1 when rain stopped play for the day.

Chris Baum (Charlotte, N.C./Providence H.S.) earned his first win of the tournament against UIC, defeating the Flames’ Camilo Giraldo 6-2, 6-0.  Kyle Stump (Plymouth, Ind./Plymouth H.S.) also posted a victory in the first session of the day, a 6-4, 6-2 triumph over Alex Marginean of UIC.  Stump then fell later in the day against Jesse Hardacre 6-2, 2-6, 10-6.

Michael Woodson (Raleigh, N.C./Ravenscroft H.S.) rebounded from a loss in a match tie-break for the third set in his first match with a 6-0, 6-3 win against Selwyn Hansana of Lewis to close the day.  Woodson had falled 2-6, 6-1, 10-6 against Gautham Oroskar of UIC.

Jose Gaspar (Sao Paulo, Brazil, CEAD H.S.) had to retire from his lone match trailing 6-2, 1-0 against Uno Lapimaa of Lewis.

In the lone doubles match of the day that was completed, Baum and Whitmer downed Hardacre and Tilton of Lewis 8-2.  DeHerrera and Stump trained Lapimaa and Pestinger 7-1 when rain halted play.

Valparaiso will return to the courts next Saturday and Sunday participating in the Dayton/Wright State Invitational held in Dayton, Ohio.