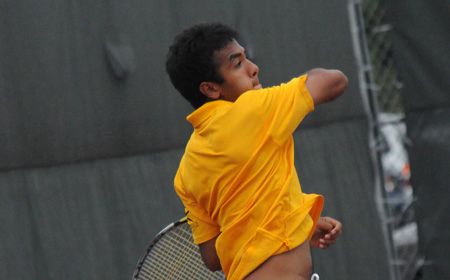 Siddarth Mehta (South Bend, Ind./Clay H.S.) rallied in a match tie-break to capture the championship in the C flight of singles for Valparaiso on Sunday afternoon as the Crusaders concluded play in Dayton, Ohio at the Dayton/Wright State Invitational.

Mehta won the opening set against Zeeshan Ismail of Youngstown State 6-4 before falling 5-7 in the second set.  Playing a match tie-break to decide the championship, Mehta fell behind 5-0 before rallying to win 10-8, giving the Crusaders a flight championship.  Carlton Lyons (South Bend, Ind./Clay H.S.) also won his third place match in the same flight, downing Art Keighley of Wright State 6-3, 6-1.

Valpo finished doubles a perfect 3-0 on the day as Kevin DeHerrera (Littleton, Colo./Chatfield H.S.) and Kyle Stump (Plymouth, Ind./Plymouth H.S.) posted an 8-2 triumph over a duo from Dayton.  For the weekend, Valpo was 8-3 in doubles action.

DeHerrera also captured the title in the back draw of A singles, posting a pair of victories on Sunday.  He topped Stephane Antwi of Wittenberg 6-3, 7-5 before rallying from a set down to defeat Rodrigo Campos of Youngstown State 1-6, 6-3, 10-7.  Chris Baum (Charlotte, N.C./Providence H.S.) and Jose Gaspar (Sao Paulo, Brazil/CEAD H.S.) both dropped their semifinal matches in the main draw of the A flight.

Stump and Woodson both won matches in the back draw of B singles and were to face each other for the title, but opted not to play that championship match.  Woodson defeated Tyler Strong of Wittenberg 6-0, 6-3 while Stump downed Alex Crum of Dayton 7-5, 6-3.  Whitmer and Honert each fell in the semis of the main draw in the B flight.

For the weekend Valpo finished play 28-11 overall, including 20-8 in singles play.

The Crusaders will wrap up the fall season October 21-24 at the ITA Regional Tournament held in Notre Dame, Ind.