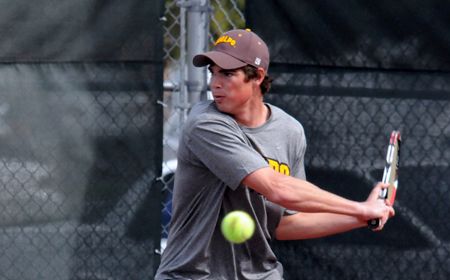 “We had a solid performance in both singles and doubles,” head coach Jim Daugherty said afterwards.  “They are a very solid team and considering this was our first match of the spring and their sixth I thought we played well.”

Chris Baum (Charlotte, N.C./Providence H.S.) nearly pulled out a singles win for the Crusaders at the second spot, falling in a match tie-break 7-5, 4-6, 10-6 to Pablo Olivarez.

“Chris really rebounded after a shaky start,” said Daugherty.  “He turned the match around and played brilliantly despite the loss.”

Valpo also had close matches at throughout the top four spots in the order, but Western Michigan (5-1) was able to prevail in straight sets in each of the other contests.  Jose Gaspar (Sao Paulo, Brazil/CEAD H.S.), playing number one singles for the first time as a Crusader, battled Michael Calderone before losing 6-3, 6-3.  Kevin DeHerrera (Littleton, Colo./Chatfield H.S.) also had a tough match at the third spot, falling 6-4, 6-2 to Simon Blomberg.  Ross VanderPloeg had a fight on his hands as well for the Broncos at four, as Adam Whitmer (Shipshewana, Ind./Westview H.S.) fell just 6-3, 6-2.

“Our players really played well at the top, and our depth should be more evident as the season moves along,” Daugherty added.

The Crusaders were also competitive in doubles on the evening.  Whitmer and Honert battled Blomberg and Casey Cullen at the second spot before falling 8-6 while DeHerrera and Kyle Stump (Plymouth, Ind./Plymouth H.S.) dropped an 8-5 match to Olivarez and Montasser at the third spot.  Gasper and Baum were defeated 8-3 at the top of the lineup against Michael Calderone and Kazuya Komada.

Valparaiso (0-1) will return home next Saturday, Feb. 5 to face IUPUI.  Match time is set for 2 p.m. at the Courts of Northwest Indiana.