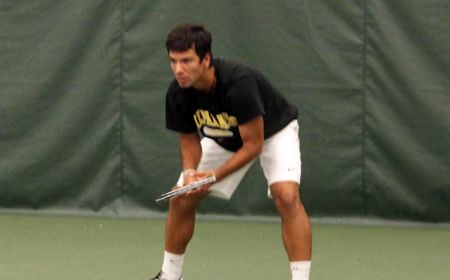 Valparaiso forced a pair of matches to go the distance on Friday afternoon, but Ball State came away victorious in every match as the Cardinals downed the Crusaders 7-0 at the Muncie YMCA.

Jose Gaspar (Sao Paulo, Brazil/CEAD H.S.) and Chris Baum (Charlotte, N.C./Providence H.S.) each forced third sets at the top two singles spots.  Gaspar rallied after losing the opening set, only to fall in a match tie-break against Dalton Albertin 6-0, 5-7, 10-6 at number one singles.  Baum won the first set against Alexandre Brym at the second spot, only to fall in three sets 3-6, 6-4, 6-2.

“We were competitive in most of our singles matches,” head coach Jim Daugherty said.  “We got off to a slow start but played better as the match went along.”

Ball State (5-1) opened the match winning all three doubles contests.  Gaspar and Baum fell 8-5 to Cliff Morrison and Zane Smith at the top spot while DeHerrera and Stump lost by the same score at third doubles to Dave Thomas and Austin Smith.  Whitmer and Honert lost 8-4 at number two doubles against Alex Doherty and Jon Wegener.

“Doubles was similar to singles,” Daugherty said.  “We dug ourselves a hole early but came back to make a match out of it.  Unfortunately it was too late and we ran out of time.”

Valparaiso (0-2) will have Saturday off before facing Bradley on Sunday afternoon.  First serve is set for 1 p.m. CST at the South Bend Racquet Club.