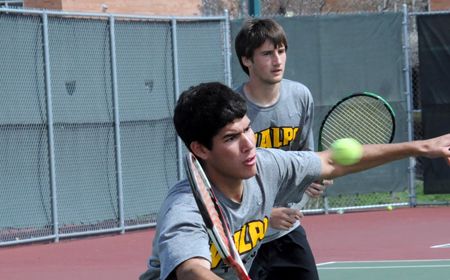 Valparaiso won a doubles match and forced three sets in four singles contests, but was unable to get on the scoreboard on Sunday afternoon as the Crusaders fell 7-0 to Bradley at the South Bend Racquet Club in Mishawauka, Ind.

“It is very frustrating to play so many close matches, yet come up empty,” head coach Jim Daugherty said.  “We know we’re not far off the mark.  We need to improve, but we’re getting close to getting over the hump.”

In singles action, the middle four spots in the lineup all went three sets, including three contests in which the Brown and Gold won opening sets.  Baum fell to Cuadrado 3-6, 6-1, 6-3 at the second spot in the lineup while DeHerrera lost 4-6, 7-6 (2), 6-4 against Kalhorn at number three.  Whitmer dropped a 6-7 (8), 6-2, 6-1 match versus Romane at number four singles while Honert suffered a 6-2, 3-6, 7-5 setback against Justin Abrams at number five singles.

Valparaiso (0-3) will return to the courts on Friday morning, hosting Toledo.  First serve is set for 10 a.m. at the Northwest Athletic Club in Michigan City.