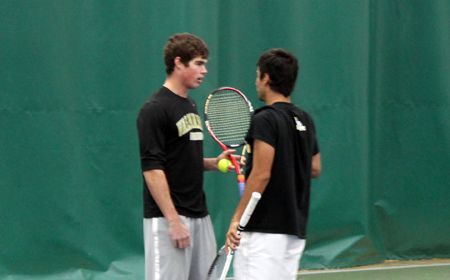 Valparaiso won the crucial doubles point and then took four of the six singles matches to defeat Eastern Illinois 5-2 on Sunday afternoon at the South Bend Racquet Club in Mishawauka, Ind. for the Crusaders’ second straight victory.

“We had a very solid performance today,” head coach Jim Daugherty said.  “We’re picking up momentum as a team.”

With the doubles point coming down to the top spot, the Crusaders’ duo of Chris Baum (Charlotte, N.C./Providence H.S.) and Jose Gaspar (Sao Paulo, Brazil/CEAD H.S.) won a tie-break against Jamie Firth and Matyas Hilgert 9-8 (4).

“We did a great job to win the doubles point,” Daugherty said.  “A lot of credit goes to that first doubles team.”

Baum extended Valpo’s lead to 2-0 with a 6-2, 6-1 victory over Race at number two singles before Whitmer put the Crusader on the verge of victory with a come from behind 3-6, 6-3, 6-1 triumph over Dryden at the fourth spot.  Honert then secured the match with a 6-3, 6-2 win over Bauman at fifth singles.  Michael Woodson (Raleigh, N.C./Ravenscroft H.S.) added another comeback victory over Volodymyr Zverkovsky 2-6, 6-0, 6-2 at the bottom of the order.

Valparaiso (2-4) will return to the courts next Saturday for a 3 p.m. CST match against Michigan State in East Lansing, Mich.