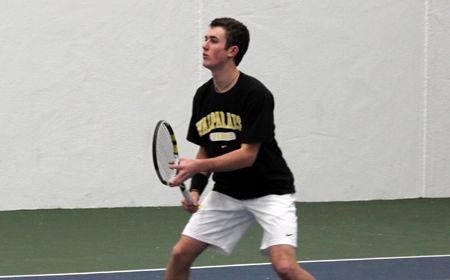 Valparaiso batted in every match with 49th-ranked Michigan State on Saturday, with freshman Eric Honert (Arvada, Colo./Ralston Valley H.S.) earning a singles victory, but the Spartans emerged with a 6-1 victory over the Crusaders at the MSU Indoor Tennis Facility in East Lansing, Mich.

“Give Eric credit today,” head coach Jim Daugherty said.  “He played two great sets against a very good team.  I was happy that we were able to get at least one good set out of everyone today.”

Honert was a 7-5, 6-4 victor over Christian Roehmer at the fifth spot to earn his eighth singles win of the season, tying for the team lead.

The Spartans opened the match winning all three doubles contests.  Brooks and Aaron Pfister downed Gaspar and Baum 8-2 at one doubles while Hulewicz and Stratton won by the same score at the second spot against Whitmer and Honert.  Richmond and Jason Norville were 8-3 winners against DeHerrera and Kyle Stump (Plymouth, Ind./Plymouth H.S.) at the bottom of the order.

Valparaiso (2-5) will return to the courts Friday, March 4, to begin its spring break trip in Orlando, Fla.  The Crusaders will face Presbyterian at 2 p.m. CST.