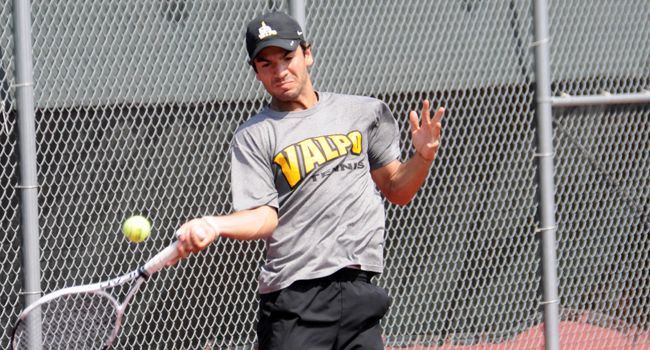 Valparaiso sent its seniors off on a high note on Wednesday afternoon with a 5-2 victory over IUPUI at the Valpo Tennis Complex, the Crusaders’ third straight win and fourth in its last five matches.

The decisive doubles match at the second spot went to a tie-break.  Joel Modesitt and Nick Volz of IUPUI jumped on top 3-0 in the tie-break but Chris Baum (Charlotte, N.C./Providence H.S.) and Adam Whitmer (Shipshewana, Ind./Westview H.S.) stormed back to capture the point for the Crusaders with a 9-8 (5) victory.

IUPUI (7-15) tied the match at one as Chase Emerson downed Whitmer 6-3, 6-1 at number five singles.  The Crusaders took control though, as Honert cruised to a 6-0, 6-0 win at the fourth spot against Vasalakis.  Stump, one of two seniors playing in their final home match, put the Brown and Gold within a point of the victory with a 6-1, 6-3 triumph over Hammond at sixth singles.  The other senior, Gaspar, then clinched a win over Mojsejev by the same score at the top of the lineup.

“It’s nice to send our seniors out with a win,” head coach Jim Daugherty said.  “This team fought hard today for the win and we’ll look to carry this momentum into conference play this weekend.”

Valparaiso (9-11) will head out on the road to wrap up the regular season this weekend with a pair of matches.  First up is Butler on Saturday morning in Indianapolis, Ind. with first serve slated for 9 a.m. CDT.