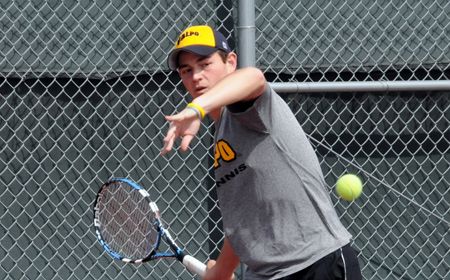 Michael Woodson fell in the consolation semifinals of the of the "B" flight on Sunday. (Ray Acevedo)
Related Links

Valparaiso wrapped up play at the Wright State/Dayton Fall Shootout on Sunday morning with Egan Hart (Raleigh, N.C./Ravenscroft H.S.) advancing to the finals of the consolation draw of the “B” singles.

Hart downed Junya Saruta 6-3, 6-2 in the semifinals before he fell in a match tie-break to Rodrigo Campos of Youngstown State 6-2, 4-6, 10-4 in the championship match.  Campos had defeated Valpo’s Michael Woodosn (Raleigh, N.C./Ravenscroft H.S.) 6-3, 6-2 in the other semifinal match.

Baum and Adam Whitmer (Shipshewana, Ind./Westview H.S.) teamed in the championship match of the “A” doubles flight against Michal Lyzwa and Evan Neuman of Wright State.  The Raiders downed Valpo’s top doubles team 8-6.

Valparaiso will host its annual alumni tournament on Saturday afternoon as part of Homecoming weekend with the action beginning at 3 p.m. at the Valpo Tennis Complex.