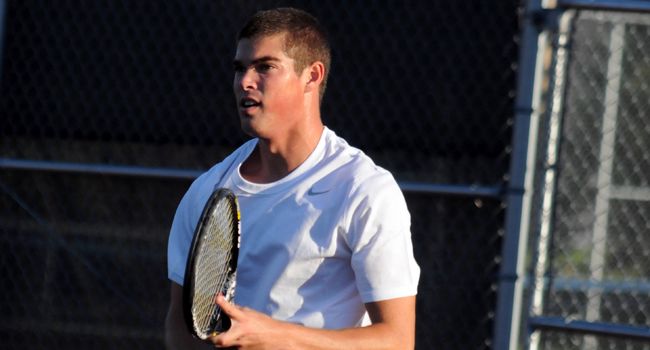 Chris Baum won at number one singles and doubles for the Crusaders in the victory at Dayton. (Ray Acevedo)
Related Links

Valparaiso’s men’s tennis team picked up the all-important doubles point on the way to recording its first victory of the 2012 spring season on Saturday afternoon, defeating Dayton 4-3 at the Five Seasons Racquet Club in Dayton, Ohio.

The Crusaders came out and swept the three doubles matches to win the first point of the match.  Chris Baum (Charlotte, N.C./Providence H.S.) teamed with Adam Whitmer (Shipshewana, Ind./Westview H.S.) for an 8-5 victory over Andrew Hanley and Benni Benalcazar at the top of the order.  Kevin DeHerrera (Littleton, Colo./Chatfield H.S.) and Eric Honert (Arvada, Colo./Ralston Valley H.S.) combined for an 8-6 triumph over Robert Salcedo and Joe West at the second spot while Michael Woodson (Raleigh, N.C./Ravenscroft H.S.) and Sidderth Mehta (South Bend, Ind./Clay H.S.) downed Colin Bernier and Josh Maylon 8-4 at the third spot.

“We were very solid in doubles all the way through the order today,” head coach Jim Daugherty said.  “I am pleased with how well we played at all of the positions and it really jump-started this win.”

The Crusaders completed the victory in singles play, winning the top three spots in straight sets.  Baum defeated Hanley 6-2, 6-3 at number one while Honert was a 6-1, 7-6 (3) winner over Salcedo at the second spot.  DeHerrera added a 7-6 (3), 6-3 triumph against West at third singles.

“The top of our lineup really stepped up to complete the win,” Daugherty added.

Valparaiso (1-1) will open the home portion of its schedule next Saturday afternoon (Feb. 11), hosting Grace at Matchpoint Tennis Club in Griffith, Ind.  First serve is set for 3 p.m.