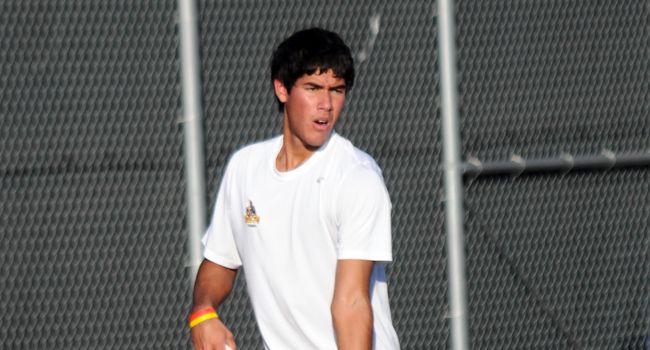 Valparaiso began its stretch of five matches in five days on Saturday morning with a 7-0 sweep of Siena at the Star Island Resort in Kissimmee, Fla.

“This is a great start to our spring break trip,” head coach Jim Daugherty said.  “We played really well today.  I told the guys we need to carry this momentum with us throughout the week and build on each match we play.”

The Crusaders opened the match sweeping all three doubles contests for the day’s first point.  Chris Baum (Charlotte, N.C./Providence H.S.) and Adam Whitmer (Shipshewana, Ind./Westview H.S.) got the day going with an 8-1 victory over Peter Collins and Alex Burbine at number one doubles.  Eric Honert (Arvada, Colo./Ralston Valley H.S.) and Kevin DeHerrera (Littleton, Colo./Chatfield H.S.) secured the point with an 8-5 win over Jarrett Siwiec and Eric Summanaru at the second spot before Michael Woodson (Raleigh, N.C./Ravenscroft H.S.) and Siddarth Mehta (South Bend, Ind./Clay H.S.) completed the sweep with an 8-3 triumph over Vikaran Kadaba and Dylan Roberts at third doubles.

In singles action the Crusaders won all six matches in straight sets against the Saints (2-7).  Honert opened with a 6-0, 6-0 shutout against Roberts at number two for his team-leading 11th victory before Baum added a 6-0, 6-3 win over Collins at the top of the lineup.  DeHerrera secured the match win with a 6-2, 6-2 triumph against Burbine at three while Whitmer topped Siwiec 6-2, 6-0 at the fourth spot.  Mehta added a 6-1, 6-0 win at six against Matthew Funiciello before Woodson completed the shutout defeating Darren Reisch 6-2, 6-2 at number five singles.

Valparaiso (3-4) will look to return to the .500 mark for the season on Sunday afternoon, facing Franklin & Marshall.  First serve is slated for 11:30 a.m. CDT.