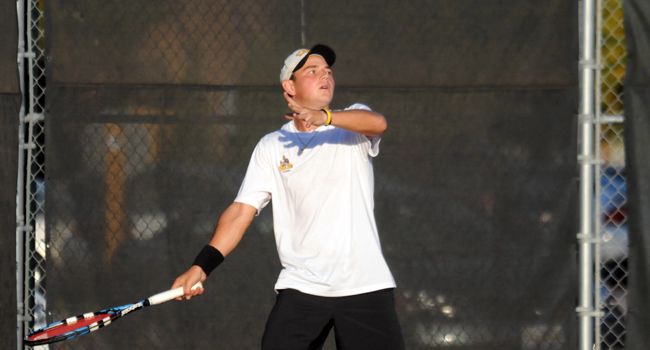 Playing its fifth match in as many days, Valparaiso saw its four-match winning streak come to an end on Wednesday afternoon, dropping a tight 4-3 decision to Colgate to conclude its spring trip in Kissimmee, Fla.

“This was a tough ending to the week,” head coach Jim Daugherty said.  “The guys just didn’t have their legs today like they did earlier in the week before playing the five matches.  Colgate is a solid squad and overall I think we had a great week down here.  We gained some confidence we hope to carry with us into conference play.”

The Crusaders fell behind 3-1 before rallying to tie the match at three, but was unable to win the decisive match in three sets.

Woodson tied the match at one for the Crusaders with a 6-0, 6-1 win over Connor Feuille at number six singles for his fifth consecutive victory this week.  The Raiders won at first and third singles to build a 3-1 advantage.  Gensburg topped Baum 6-4, 6-1 at the top while Goldstein was a 7-6 (4), 6-3 winner at the third spot.  Honert pulled Valpo within one with his fifth straight win, and ninth in his last 10 contests, defeating Berkowitz 6-4, 7-5.  Whitmer tied the match at three with a 7-6 (4), 7-5 win over Spellberg, but Colgate’s Alan Pleat rallied from a set down to defeat Mehta 3-6, 6-1, 6-2 at fifth singles to clinch the match.