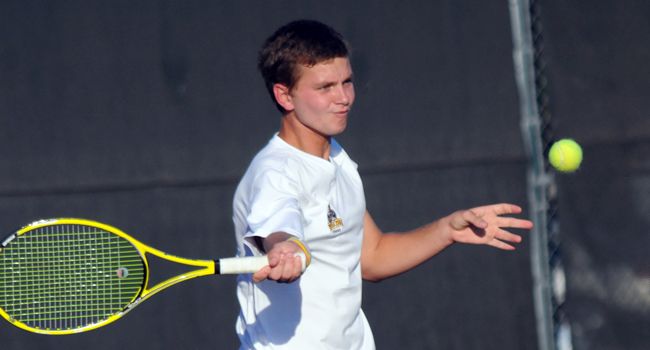 The Valparaiso men’s tennis team continued its 2012 fall campaign on Friday in the first of three days of competition at the Purdue Invitational in West Lafayette, Ind.

In Flight B of singles, freshman Lucas Waak (Manitowoc, Wis./Roncalli) forced a tiebreak in his opening set, but eventually dropped a 7-6 (4), 6-3 decision to Ali Shabib of Cleveland State.  Also in Flight B, freshman Michael Baiocchi (Naperville, Ill./Neuqua Valley) lost 6-1, 6-0 to Sten Leusink of DePaul.

Doubles play saw Savaglio and Baiocchi team up against the nation’s 13th-ranked doubles pair in Purdue’s Diego Acosta and Aaron Dujovne, and while the rookie duo took one game, they eventually fell 8-1.  The freshman pair dropped a tight 8-6 decision to Toledo’s Francisco Stuardo and Grant Adams later in the day.  Also in Flight A of doubles, Honert and Oakes lost 8-4 to Shabib and Niklas Jonsson of Cleveland State and 9-7 to Purdue’s Arthur Dobradin and Evan Hawkins.

Due to byes, the Crusaders’ pair of duos in Flight B of doubles each played just one match on Friday.  Etman and Hickey dropped an 8-4 decision to Freddy Abunku and Zach Mueck of Xavier.  Meanwhile, Waak and Hart took on a mixed squad of Western Michigan’s Wong and Ruben Geeraert of Butler, falling 8-5.

Day two of the Purdue Invitational is slated for an 8 a.m. CDT start, with singles play opening the day.  Two rounds of singles and one round of doubles are scheduled for Saturday.