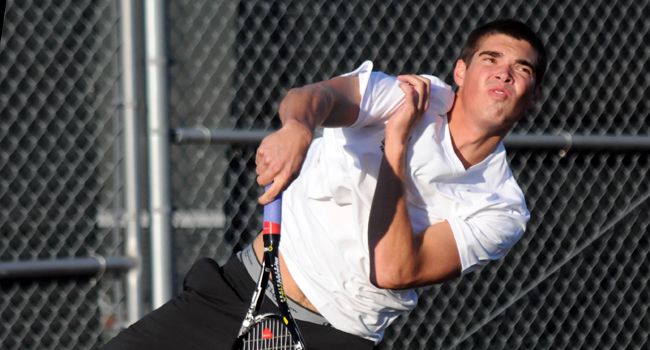 Head coach Jim Daugherty inserted Daniel Etman into the lineup for the first time in Tuesday night's match against Wesleyan and the freshman won the winner-take-all match at No. 5 singles.

Wesleyan struck first by clinching the doubles point at No. 2.  Eric Honert and Lucas Waak scored a quick 8-2 loss at No. 1 doubles. The Valpo doubles team of Michael Baiocchi and Michael Savaglio responded with a 9-7 triumph at No. 3.  The No. 2 team of Chris Baum and Danny Oakes fell 8-6 in the decisive doubles match.

Jeff Legunn prevailed in straight sets over Baiocchi at No. 4 by the score of 6-4, 6-1.

Savaglio and Sam Rudovsky engaged in a lengthy battle between two freshmen before Rudovsky scored the final point for Wesleyan with a 2-6, 7-5, 7-5 victory.

As has been the case all season, the Crusaders came through with their backs against the wall.

With the match resting solely on the shoulders of Daniel Etman, he rallied to win 7-5, 1-6, 6-4 to clinch the match-winning point and give Valpo its eighth team victory on the season.  The eight wins already matches last season's total.

"This team is playing at a very high level right now.  They're refusing to lose," Daugherty remarked.

The Crusaders will enjoy Wednesday off before taking on Creighton in the final match in Florida.  The dual is scheduled for Thursday at 5:30 pm Eastern/4:30 pm Central.