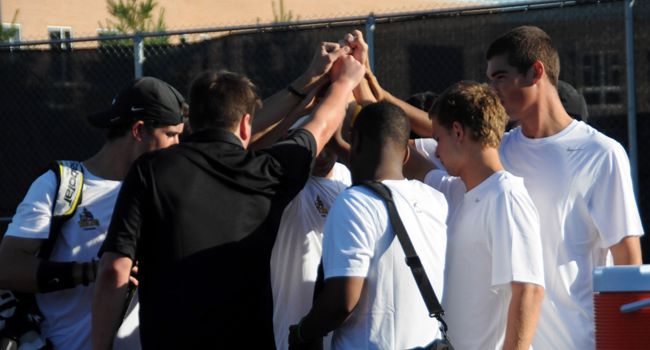 Valpo finished off a perfect Florida trip Thursday night defeating Creighton 5-2 in Orlando.  The win was the team's fifth in a row.  More impressively, the victory surpassed last season's total of eight and the Crusaders have to play a point in conference.

The Brown and Gold won all three matches in doubles play.  Chris Baum and Danny Oakes were the first to finish in doubles as they turned in an 8-6 victory.  Eric Honert and Lucas Waak clinched the doubles point winning 8-5 at No. 1.  Freshmen Michael Baiocchi and Michael Savaglio went to a tiebreaker in their doubles match before taking it 8-7 at No. 3.

Contrary to the last couple outings, only one singles match went to three sets.

Honert, Savaglio and Baiocchi all were victorous in straight sets at No. 1, 3, and 4 respectively.  Baum dropped his match at No. 2 6-4, 6-3 to fellow senior Sean Mathison.

Yesterday's hero Daniel Etman was unable to produce more magic Thursday as he fell to Quinn Dippel 6-3, 6-3 at No. 5 singles.

Waak went to a third-set tiebreaker with Anthony Rauschenbach, outlasting the freshman 14-12 after he won the first set 6-3, but losing the second 7-5.

Valpo will return to the indoor courts to begin Horizon League play Sunday, March 24th when they challenge the Wright State Raiders in Dayton.