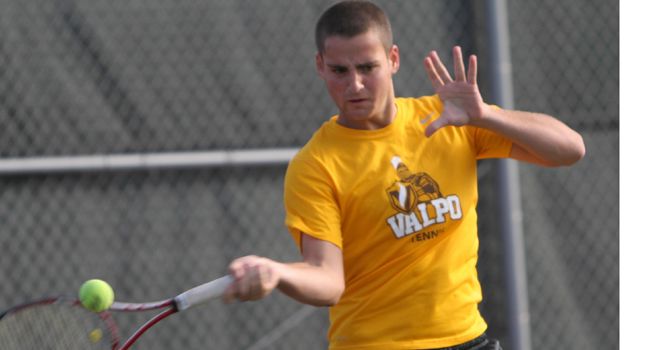 The freshmen got in on the fun Saturday at the Valpo Tennis Complex as Valpo won its sixth match in their last eight attempts.  Despite losing at #1, #2, and #3 singles, the bottom half of the lineup all came through with straight set victories.

The Crusaders claimed the doubles point when Chris Baum and Danny Oakes dispatched Mateus Moreira and James Thorp 8-4 at #2.  The win came after Michael Baiocchi and Michael Savaglio scored a fast decision over brothers Henrique and Lucas Pereira at #3 doubles.

Daniel Etman won his first set 6-3 over Lucas Pereira before the second set was knotted up at 6-6.  Pereira jumped out to a 6-2 lead in the tiebreaker, but Etman stormed back to win seven of the next eight points, winning 9-7.  The comeback meant the 10th victory of the season for Valpo.

The Crusaders are in the middle of a five-match homestand.  IPFW comes to Valparaiso Wednesday for a 3:00 pm showdown. Stay tuned to valpoathletics.com to see whether the match will be played at the Valpo Tennis Complex or at the Courts of NWI.