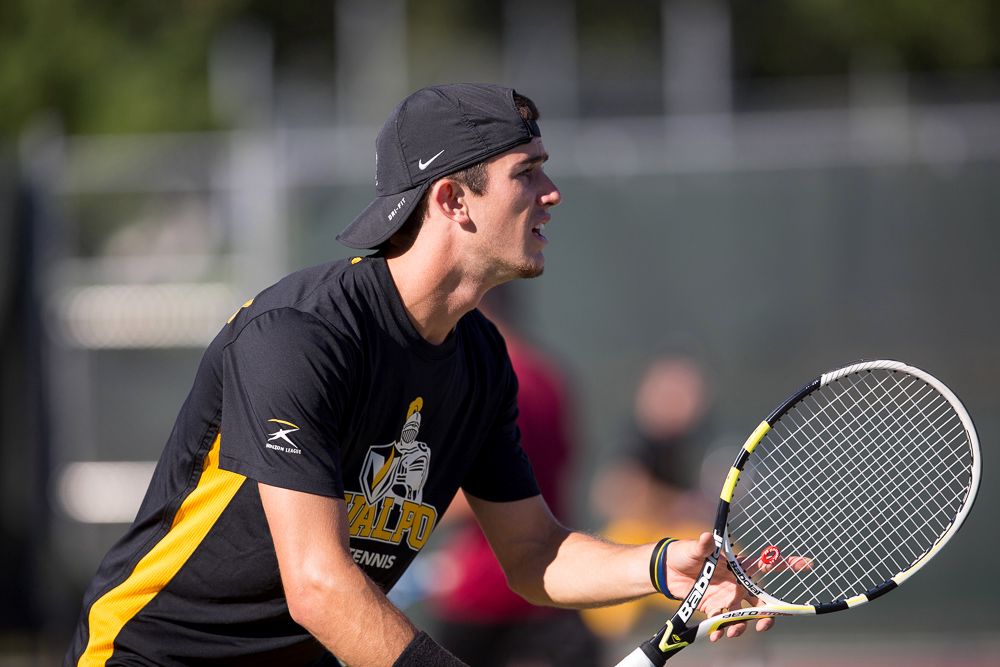 For Eric Honert (Arvada, Colo./Ralston Valley), it's a journey that started at the Purdue Invitational in September of 2010 with a marathon three-set victory over Case Western Reserve's Ryan Haines. On Friday, the personal journey reached its climax with a second round 6-2, 6-1 win over Olivet Nazarene's Navarro Veys. The victory - Honert's 58th of his career - set him alone at the top of the career singles victories in Valpo men's tennis history.

"I can't be prouder of someone who was played four years for me. He is definitely the epitome of hard work on the court. I was just happy to be on the court. It was a very memorable moment for me. Hats off to Nate Buckert - to be in that circle is honorable," head coach Jim Daugherty.

It was a banner day all around for the Crusaders as the hosts recorded an 8-2 record in doubles play before steamrolling through singles action, finishing with a 19-1 record in the first day of the Valparaiso Fall Invitational.

The freshmen duo of Dave Bacalla (Skokie, Ill./Niles North) and Charlie Emhardt (Carmel, Ind./Carmel) took their first two matches 8-3 and 8-0. The pair will face Chicago State's tandem of Sergiu Muresan and Mario Noboa at 9 am Saturday morning in the championship match of Flight A doubles. Muresan and Noboa edged out Jeffrey Schorsch (Perrysburg, Ohio/Perrysburg) and Michael Baiocchi (Naperville, Ill./Neuqua Valley) 8-6 in the semifinals to prevent an all-Valpo A doubles final. Instead, the duo will battle Huntington's Vlad Khudziy and Jose Hungria in the 9 am third-place spot.  Schorsch and Baiocchi had defeated Cardinal Stritch's Jimmy Le and Raymond Weich 8-4 earlier in the day.

Kyle Dunn (Fond du Lac, Wis./Fond du Lac) and Danny Oakes (Elburn, Ill./Saint Charles North) reached the finals of the B doubles bracket with a pair of 8-4 wins. The two have a date with Huntington's Diego Inurruteggi and Joseph Straznicky in the championship match at 9 am. Just as in the A flight doubles, an all-Crusader final was nixed when Inurruteggi/Straznicky outlasted Honert and Lucas Waak (Manitowoc, Wis./Roncalli) 9-7 in the semifinals. Honert and Waak play Goshen's Matt Delsar and Vasanth Palanisamy in the third-place slot, also at 9 am.

The afternoon brought plenty of singles action for the six participating schools. The Crusaders proved to be at the head of the class as they rattled off 19 wins in 20 singles matches.

A pair of Crusaders will face off in the other semifinals of the A singles bracket. Honert won his aforementioned record-breaking second round match after defeating Straznicky 6-2, 6-2 in the opening round. The veteran is set for a 10:30 am showdown with the rookie Bacalla. Bacalla dropped just three games in two matches en route to his semifinal matchup with Honert. He won 6-1, 6-0 in the opening round, then 6-0, 6-2 in the second round.

Baiocchi handed Olivet Nazarene's Peter Jensen a 6-0, 7-5 defeat in Flight B singles before he fell 6-2, 6-3 to Huntington's Diego Inurretuggi. A win over Inurretuggi would've set up a semifinal match versus teammate Kyle Dunn. Dunn won easily in his first round match before downing Chicago State's Julian Chavez 6-2, 6-2.

Savaglio continued his improved play with a pair of straight set victories in B singles. The sophomore beat Cardinal Stritch's George Watson 6-2, 6-2 in the opening round. He followed up with a 6-0, 6-3 victory over Olivet Nazarene's Caio Barros. He'll face fellow sophomore Lucas Waak, who also won in straight sets in his first two matches. Waak won a 6-2, 6-1 tilt against Olivet Nazarene's Tyler Ellis before advancing via a 6-4, 6-1 victory over Cardinal Stritch's Nadar Murad. The two teammates will play at 11:45 am Saturday morning for a spot in the B singles finals.

The opposite semifinals boasts two Crusaders - Hickey and Oakes. Hickey shutout Cardinal Stritch's Brandon Vurnick 6-0, 6-0 before cruising past Huntington's Jacob Cross 6-2, 6-0. Oakes won his first round match 6-0, 6-1 against Goshen's Caleb Harnish. Oakes had to rally in his second round tilt versus Tommy Vang of Cardinal Stritch. After dropping the first set 4-6, Oakes won decisively in the second set 6-2 before claiming the third set tiebreaker 10-8. Hickey and Oakes' semifinal match is scheduled for 11:45 am Saturday.

"We came out with a lot of energy and intensity and we took it to every team in every match. I expect the same out of this team in day two tomorrow," assistant coach Michael Woodson said.

The second and final day of the Valparaiso Fall Invitational begins Saturday morning at 9 am with all three doubles flight championship matches.