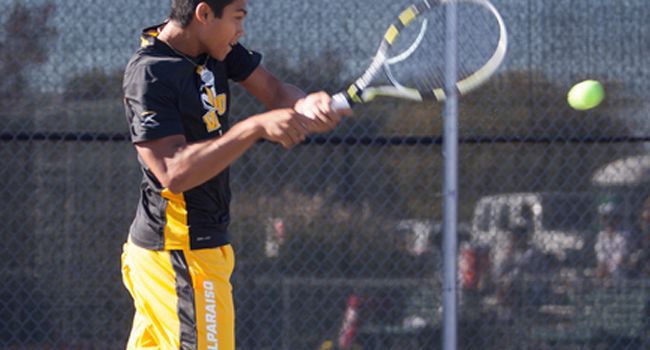 The Crusader men opened their season with a bang Saturday at the Courts of NWI as they collected convincing wins over Indiana Wesleyan and Olivet Nazarene. Simultaneously, Saturday represented the spring opener for Valpo's most highly-touted recruiting class.

The Crusaders clinched the doubles point thanks to a victory from Dave Bacalla (Skokie, Ill./Niles North) and Daniel Oakes (Elburn, Ill./Saint Charles North) at No. 1 doubles. The team handed IWU's Kyle Johnson and Brandon Dubuque an 8-3 defeat.

The No. 3 doubles duo of Michael Savaglio (Kenosha, Wis./Mary D. Bradford) and Kyle Dunn (Fond Du Lac, Wis./Fond Du Lac) swept the doubles portion of the match with an 8-2 triumph over Adam Wroughton and Daniel Smith.

Sophomore Lucas Waak (Manitowoc, Wis./Roncalli) recorded a 6-2, 6-0 straight set win over Smith at No. 5 singles before Savaglio prevailed at No. 2 over Brandon Dubuque handily, 6-2, 6-2.

Valpo secured the fourth and decisive point of the match when Brian Hickey (Western Springs, Ill./Fenwick) defeated Wroughton 6-1, 6-2 at No. 6 singles.

Valpo's winningest singles player in program history Eric Honert (Arvada, Colo./Ralston Valley) added to his record with a 6-3, 6-3 triumph at No. 3.

After a short break, Valparaiso advanced to 2-0 on the day taking the back end of the twinbill 7-0 over Olivet Nazarene.

The No. 1 doubles team of Bacalla and Oakes made it two doubles wins in a row with an 8-5 win over Landon Williams and Navarro Veys.

Valparaiso was awarded the doubles point after Dunn and sophomore Michael Baiocchi (Naperville, Ill./Neuqua Valley) made quick work of Oscar Mancineiras and Peter Jensen 8-2 at No. 3 doubles.

Honert and Waak kept the Crusaders perfect on the day at doubles with an 8-7 (7-3) victory at No. 2.

Schorsch cruised to a 6-1, 6-1 win over Veys at No. 1 singles. Savaglio followed suit with another straight win. The sophomore beat Juan Morales 6-1, 6-2.

Emhardt clinched the match for Valpo with a 6-1, 6-0 victory over Peter Jensen at No. 6.

Waak improved his individual singles record to 10-2 with a 6-1, 6-4 triumph against Caio Barros.

The Crusaders return to action next Saturday in Indianapolis when they take on the Butler Bulldogs at 1:00 pm.