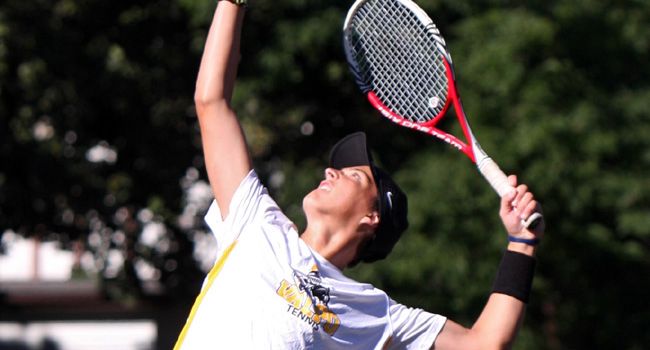 The Valparaiso men's tennis team shutout both Robert Morris and St. Cloud State Sunday at the Star Island Resort in Orlando, Florida. In the process, freshman Jeffrey Schorsch (Perrysburg, Ohio/Perrysburg) notched his 20th win, putting his name alongside Nic Kooyers and Eric Honert atop the Valpo record book for most singles victories in a season.

Schorsch kicked things off with a perfect 6-0, 6-0 result versus Angus Thomson at No. 1 singles. Honert followed Schorsch's lead with a 6-0, 6-0 drumming of Eduardo Rodriguez at No. 3.

Sophomore Michael Savaglio (Kenosha, Wis./Mary D. Bradford) downed Matheus Ferreira 6-2, 6-1 at No. 2 singles for the match-clinching point. Waak did his part at No. 6 singles with a 6-1, 6-0 defeat of Fernando Leite.

Emhardt had the biggest challenge at No. 5 singles when Juan Andres Hirmas took six overall games in two sets. The Crusader freshman prevailed 6-4, 6-2.

Valpo had little trouble in handling St. Cloud State in the afternoon portion of the doubleheader.

Honert and Waak claimed the first doubles match at No. 2 with an 8-1 victory over Joao Vitor Souto/Nathanial Cherry. Dunn and Baiocchi handed Christopher Mavetz and Bryan Amigo La Rosa an 8-5 loss at No. 3. Schorsch and Emhardt finished off Joao Poli/Joao Orsi 8-4 at No. 1.

Schorsch didn't drop a game in the first set of his match at No. 1 singles. He lost his only two games of the day in the second set for the 6-0, 6-2 win. The victory was his 20th on the season, tied for the most in school history.

Schorsch can stand alone atop the single season singles victories record book with his next win.

Valpo (10-3) returns to the court Tuesday afternoon when it faces Monmouth at 12 pm.