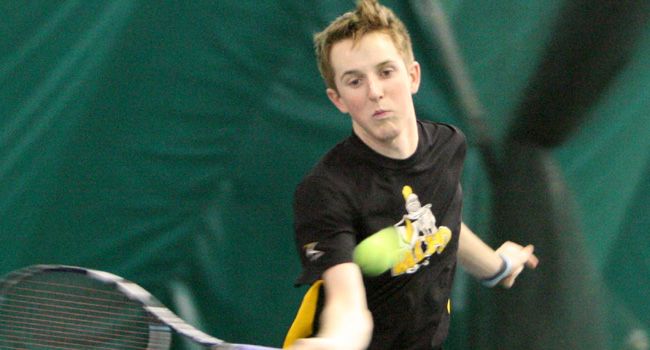 The Creighton Bluejays men's tennis team was the latest victim of Valpo's blistering play. The Crusaders pitched their fourth shutout in a row, dispelling Creighton 4-0 Wednesday afternoon at the Star Island Resort in Orlando, Florida.

Dave Bacalla (Skokie, Ill./Niles North) and Daniel Oakes (Elburn, Ill./Saint Charles North) were ahead 6-5 when doubles play was called after the Crusaders clinched the point.

In singles action, Baiocchi won in straight sets 6-1, 6-3 at No. 6 over Aaron Chalstrom.

Valpo took a commanding 3-0 lead when Emhardt finished off his eighth singles win in a row at No. 5. The freshman dispatched Lang 6-1, 6-1.

Bacalla provided the exclamation point with a 6-2, 6-3 triumph over Baker at No. 2 singles. With Valpo having clinched the win, the match concluded. Their 12th win of the slate represents one more than they won all of last season.

The Crusaders (12-3) will wrap up their highly-productive spring trip with an 11:30 am ET/10:30 am CT tilt against Quinnipiac (5-4) of the Metro Atlantic Athletic Conference.

Schorsch will seek his record-setting 21st singles victory this season against Kei Ezaka (15-6).