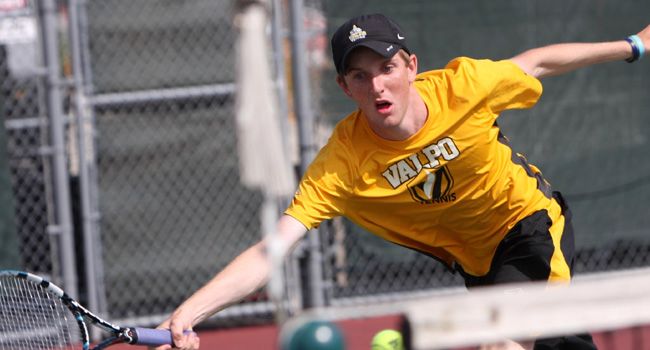 Freshman Charlie Emhardt (Carmel, Ind./Carmel) won his 19th doubles match Saturday, but the Crusaders dropped a 4-3 contest to Wright State at the Courts of NWI. For Emhardt, the victory represents a new all-time season high in doubles play, moving him one ahead of Michael Baiocchi.

Emhardt and fellow freshman Jeffrey Schorsch (Perrysburg, Ohio/Perrysburg) won 8-6 at No. 2 doubles over Lauri Makikalli/Michal Lyzwa. The Crusader triumph was sandwiched between an 8-5 loss at No. 1 and an 8-6 downing at No. 3. Eric Honert (Arvada. Colo./Ralston Valley) and Lucas Waak (Manitowoc, Wis./Roncalli)'s defeat at the hands of Myles Harris/Dan Gilbert clinched what turned out to be the decisive point in doubles play for WSU.

On the same day he became a record holder in doubles play, Emhardt won his twelfth singles match in a row. He dispatched Lyzwa 6-1, 6-2 at No. 6 to improve to 18-3 on the season.

The Raiders reclaimed their lead via Hayden Joblin's 6-3, 6-4 win over Michael Savaglio (Kenosha, Wis./Mary D. Bradford) at No. 3.

Ricardo Pineda increased Wright State's advantage to 3-1 as the junior dealt Honert a 6-2, 6-2 loss at No. 4 singles.

Wright State won the match as it received a 6-4, 6-3 win from Makikalli at No. 2 singles over Dave Bacalla (Skokie, Ill./Niles North).