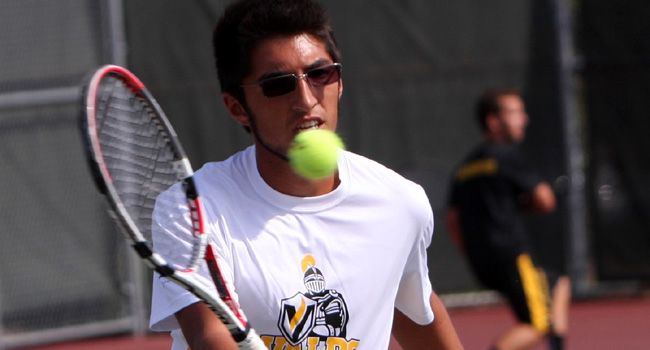 Sophomore Michael Savaglio dropped his first set 6-1 at No. 4 singles before rallying back to take the final two sets 6-4 and 6-4 Tuesday in Fort Wayne.
Related Links

Three freshmen and a sophomore recorded singles victories Tuesday in Valpo's 5-2 win over IPFW in Fort Wayne, Indiana as the Crusaders improved to 15-5 on the season.

Valparaiso dropped a nail biter at No. 1 doubles as the pairing of Dave Bacalla (Skokie, Ill./Niles North)/Daniel Oakes (Elburn, Ill./Saint Charles North) fell in an 8-7 decision to the Mastodon duo of Daniel Kang/Andres Cobos.

With the doubles point up for grabs at No. 3, Eric Honert (Arvada, Colo./Ralston Valley)/Lucas Waak (Manitowoc, Wis./Roncalli) earned the tally for the Crusaders via an 8-7 defeat of Connor Andrews and Karl Wangensten-Oye.

After he racked up twelve straight wins at No. 6 singles, Emhardt was promoted to the fifth spot where he quickly rewarded head coach Jim Daugherty with a 6-4, 6-2 triumph over Andrews.

IPFW got on the board when Wangensten-Oye scored a 6-4, 6-3 win over Kyle Dunn (Fond du Lac, Wis./Fond du Lac) at the aforementioned No. 6 hole.

With the tilt at a deadlock, the No. 1, 2, and 4 singles matches all went to three sets.

Like Bacalla, sophomore Michael Savaglio (Kenosha, Wis./Mary D. Bradford) dropped the first set 6-1 before turning it on and taking the match in three sets 1-6, 6-4, 6-4.

The Crusaders (15-5, 1-1 Horizon) return to Horizon League play Saturday when they travel to Green Bay to face the Phoenix at 2:00 pm.