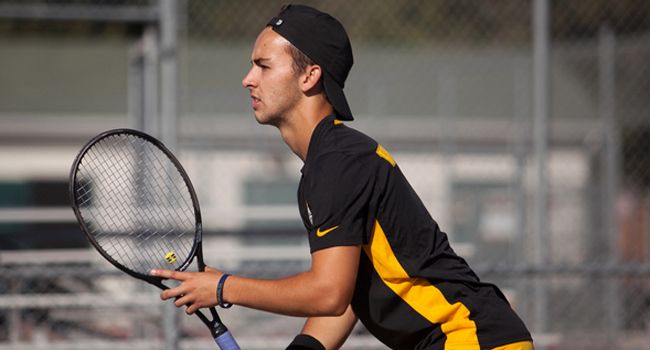 A tight battle in doubles play for the Valparaiso men’s tennis team went the way of Green Bay Saturday afternoon, and the Crusaders were unable to make up the deficit in singles action, falling to the Phoenix 6-1 in a Horizon League match in Green Bay, Wis.

The Crusaders’ No. 2 doubles team of Charlie Emhardt (Carmel, Ind./Carmel) and Jeffrey Schorsch (Perrysburg, Ohio/Perrysburg) evened up the doubles action with an 8-6 win over their Phoenix counterparts after Green Bay claimed No. 3 doubles, 8-3.  But Valpo was unable to claim the doubles point, as despite being up 5-1 and having a number of match points in the tiebreak, Green Bay came out with an 8-7 (10-8) win to go up 1-0.

Green Bay would secure the match victory with straight-set wins at No. 2, No. 3 and No. 4 singles in the first three matches to be decided.  Freshman Kyle Dunn (Fond du Lac, Wis./Fond du Lac) picked up Valpo’s lone point, earning a 6-7, 6-2, 10-8 victory over his opponent at No. 6, while Schorsch and Emhardt fell in three-set decisions at No. 1 and No. 5 singles, respectively.

Valparaiso (15-6, 1-2 Horizon) continues league play in its next match, traveling to Detroit next Friday.  First serve is slated for 2 p.m. CT.