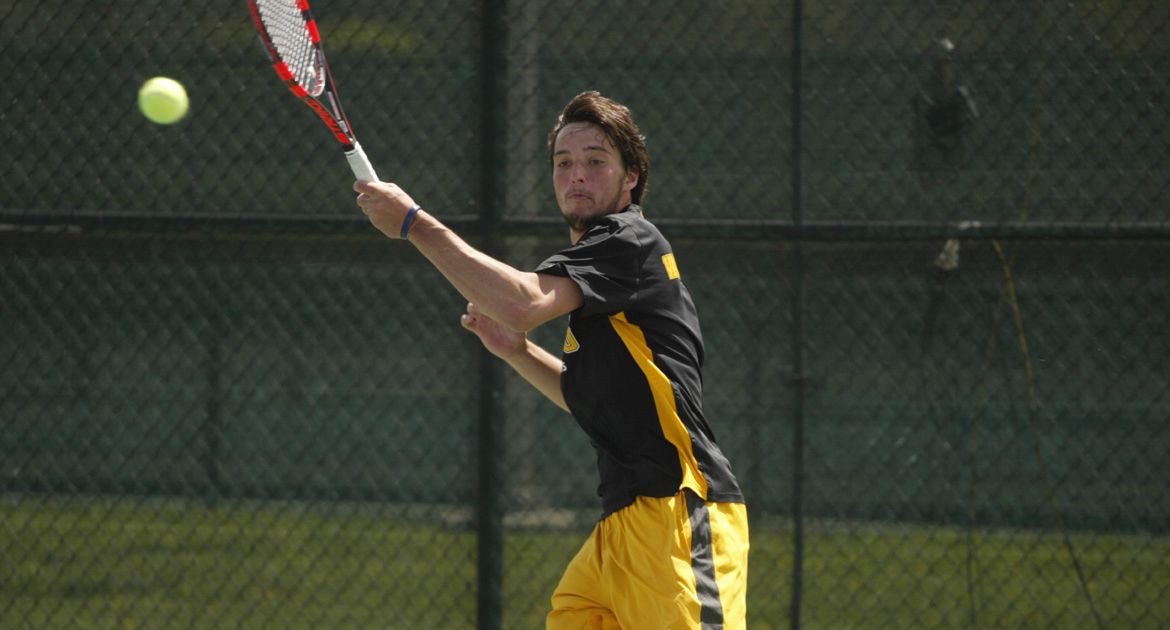 Junior Jeffrey Schorsch (Perrysburg, Ohio/Perrysburg) surrendered just three games in two matches Saturday en route to tying Eric Honert's record for career singles victories. Schorsch's 68th and 69th wins came as the Valpo men's tennis team traveled to the state capital and reinforced its reputation as an up-and-coming powerhouse in Indiana. The Crusaders dealt both Butler and IUPUI shutouts on their respective home courts to improve to 4-2 on the young season.

The Crusaders blanked their former rival, 7-0, in morning action at the Butler Bubble. Schorsch and Charlie Emhardt (Carmel, Ind./Carmel) got things off on the right foot with a 6-2 triumph at No. 1 doubles over Mikheil Khmiadashvil/Mason Dragos. Valpo secured the doubles point moments later thanks to a 6-2 victory from Chad Kissell (Latrobe, Pa./Greater Latrobe) and Kyle Dunn (Fond du Lac, Wis./Fond du Lac) versus Spencer Lang/Adrian Mag at No. 3.

Valpo met little resistance in singles play, registering straight-set wins at five of the six flights. Schorsch took down Dragos, 6-0, 6-1 atop singles action. Emhardt followed suit with a 6-1, 6-2 expulsion of Lang at No. 4. Kissell clinched the match at No. 3 singles by virtue of his 6-4, 7-6 (3) defeat of Ari Gerstein. No. 2 singles went to three sets before Dave Bacalla (Skokie, Ill./Niles North) emerged with a 7-5, 3-6, 6-3 victory over Khmiadashvil. Dunn won convincingly at No. 6 with a 6-1, 6-2 result over Mag. Garrett Gardner (Poland, Ohio/Poland) handed Alex Woldmoe a 6-2, 6-4 loss at No. 5 to complete the sweep.

Valpo showed no signs of rust in the evening match after a couple-hour break.

Schorsch/Emhardt raced out to a 6-0 victory at No. 1 doubles versus IUPUI's Bradley Luetschwager and Kyle Whittaker. Bacalla and Gardner wasted little time snatching the doubles point as they dispatched David Beasley/Akshay Verma, 6-1, at No. 2.

As was the case in the morning match, five of the six singles flights resulted in straight-set triumphs for the Crusaders.

Schorsch's 6-2, 6-0 rout of IUPUI's Jac Newis was the 69th of the junior's career, tying him with Honert's mark set in 2014. Schorsch will get a chance to break the record Friday at #46 Louisville.

Bacalla beat Beasley 6-4, 6-4 at No. 2 singles to give the Crusaders a comfortable 3-0 cushion. Dunn's 6-2, 6-2 victory over Whittaker at No. 5 represented the match-clinching point for the Brown and Gold.

Emhardt added a 6-1, 7-5 result over Jose Calero for good measure. Michael Savaglio (Kenosha, Wis./Mary D. Bradford) was victorious at No. 6 singles in his duel with Patrick McAuley. Kissell improved to 8-2 in his last ten matches with a 3-6, 6-4, 6-2 win to give the Crusaders' their second shutout of the day.

Valpo (4-2) will challenge its second ranked opponent in three weeks next Friday when it travels to Kentucky to face #46 Louisville. The Cardinals are 3-4 with all three of their wins coming at home. First serve is scheduled for 6 pm ET/5 pm CT. Live stats will be available from Bass-Rudd Tennis Center in Louisville.