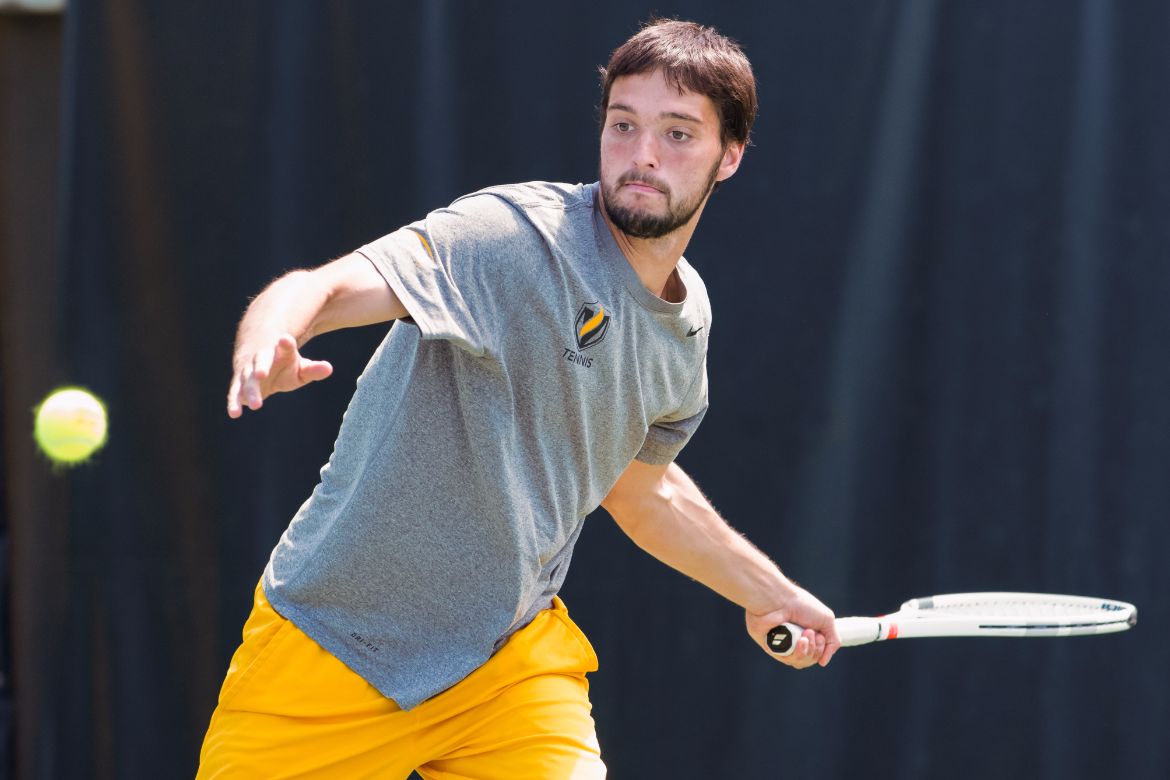 The match was tighter than the score would indicate, but the Valparaiso University men’s tennis team dropped its first-round NCAA Tournament showdown with No. 17 Michigan 4-0 on Friday afternoon.

The match started favorably for the Crusaders as the No. 1 doubles team of Jeffrey Schorsch (Perrysburg, Ohio / Perrysburg) and Charlie Emhardt (Carmel, Ind. / Carmel) picked up a 6-2 win over Jathan Malik and Connor Johnston. The Crusaders cruised to the victory in a battle of two nationally-ranked doubles tandems. Emhardt and Schorsch entered the match at No. 41 in the nation, while Johnston and Malik stood at No. 29 nationally.

It’s not the end of the road for the senior duo as Schorsch and Emhardt have earned a spot in the 2017 NCAA Men’s Doubles Championships, one of 32 doubles teams in the field. The doubles competition will be conducted May 24-29 at Dan Magill Tennis Complex in Athens, Georgia.

The first singles match to finish was No. 2, as Kissell fell to Alex Knight 6-2, 6-2. Kissell finished his sophomore campaign at 22-11, 15-8 in dual matches. Kissell is expected to be Valpo’s top returning player for the 2017-18 season. Knight is ranked No. 86 nationally.

Ancona lost his match in straight sets to Carter Lin 6-2, 6-4 at No. 6 singles. The Valpo freshman finished the season at 23-11, 16-6 in dual play. He is expected to return as a centerpiece of Valpo’s team next season.

That put the Crusaders in a precarious position, needing to win all four remaining singles matches to advance to the second round of the tournament. The Crusaders still had a pulse, as the four remaining matches all went to a third set.

The clinching match came at No. 4 singles, as Runhao Hua nailed down a 3-6, 6-0, 6-3 win over Bacalla. That ended Bacalla’s illustrious Crusader career as he finished with a 19-13 overall record and 12-8 dual mark in his senior season. He went 21-6 in doubles this year.

Bacalla, an all-league second team honoree his freshman year and a first-team selection as a sophomore, finished with 82 career singles wins and 75 doubles victories, both ranking in the top four in program history.

The other Crusader to take the court as a collegiate player for the final time on Friday was Dunn, who saw his match go unfinished at No. 5 singles, trailing 3-6, 6-4, 3-1. Dunn lost only two league singles matches in his four-year career and finished with 92 career singles victories. He went 27-7 and 19-3 in dual matches as a senior.

Schorsch was leading No. 72 Jathan Malik at No. 1 singles when the match was halted. He dropped the first set 3-6, but had come back with a 6-4 win in Set 2 and owned a 5-4 lead in the decisive set. Emhardt and Myles Schalet were even at No. 3 singles 2-6, 6-3, 3-3 when play was halted due to the clinch-clinch format of all postseason matches.

The Crusaders finish the season at 23-4 overall, setting the school record for victories in a single season for the fourth straight year.