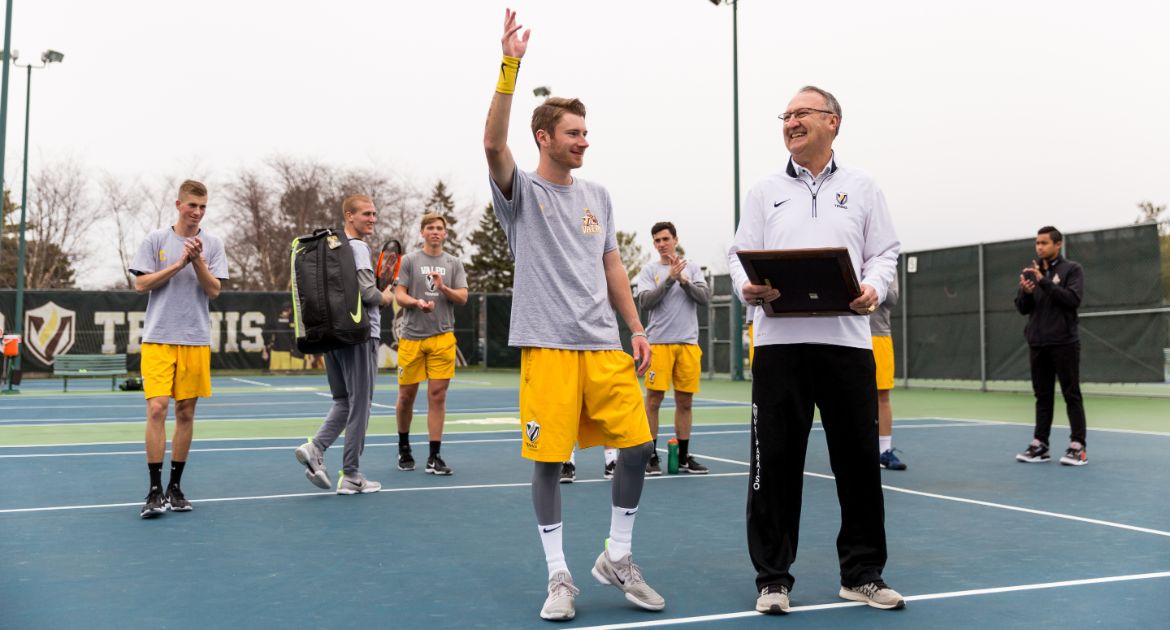 The Valparaiso University men’s tennis program will keep the bulk of its team intact with only one senior set to walk across the stage at next month’s graduation. But the lone senior is one who will leave behind a lasting legacy on Valpo tennis. Garrett Gardner (Poland, Ohio / Poland) was recognized by head coach Jim Daugherty on Saturday during a 4-3 Senior Day win over the University of Chicago, a team ranked third nationally in Division III.

Gardner prevailed in his singles match, closing out his final regular season as a Crusader. The next time Valpo drops a match will mark the end of a storied career that saw Gardner help the Crusaders to the NCAA Tournament his sophomore and junior seasons. The Valpo senior ranks fifth in program history in both career singles (73) and doubles (67) wins behind only last year’s senior quartet.

But it was one point in 2016 that stands out as the highlight of Gardner’s tennis life. He nailed down the clinching victory of the Horizon League Championship match against Green Bay, sending the Crusaders to the NCAA Tournament for the first time in program history.

The celebration was on after the 2016 victory over the Phoenix, and fast-forward to Saturday against the Maroons (13-4), and the celebration was of the more bittersweet variety as the Crusaders (8-11) honored the career of Gardner, a sports management major with a minor in business whose future plans include marketing or testing for footwear at a major athletic apparel company.

The Crusaders will begin the Summit League Tournament on Friday, April 27 in Denver, Colo. Check back to ValpoAthletics.com for addition information, including the match time and opponent.