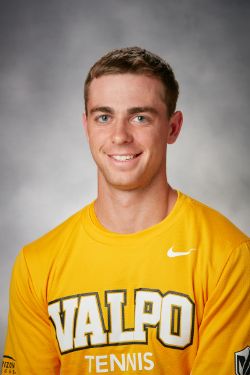 2014-15: Accumulated a 12-6 record in singles play and an 8-4 record in doubles as a junior for Valpo...assembled a 2-1 record at the Purdue Fall Invitational (Sept. 19-21), defeating Eastern Kentucky's Colin Hart, and Memphis' Louis Asser...went 4-0 in the Valparaiso Fall Invitational, collecting wins against opponents from Chicago State (Oct. 3), Cardinal Stritch (Oct. 3), and Western Illinois (Oct. 4)...tallied a 6-1 record in the spring, with all six victories coming in straight sets...recorded wins in four of his first five doubles matches...teamed up with Kyle Dunn to shutout St. Thomas Aquinas' (NY), 6-0 on March 7th.

2013-14: Went 10-3 in singles play in his second season with the Brown and Gold, including a 5-1 record in the spring...teamed up with Michael Savaglio to notch four doubles victories...his .769 winning percentage in singles play ranks 4th-highest in Valparaiso school history.

2012-13: Won 11 matches as a freshman...went 4-0 at the Valparaiso Fall Invitational...recorded three doubles victories.

Personal: Brian is the son of Al and Ann-Marie Hickey...double major in marketing and business management.