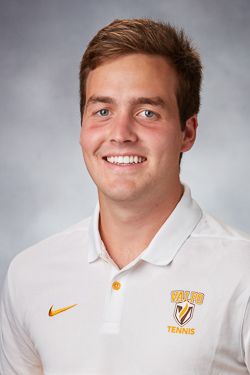 2018-19: Enjoyed a 17-11 singles record including a 3-2 mark in Summit League play… Went 9-15 in doubles action…Picked up a 6-3, 6-2 league win over Oral Roberts on Feb. 22… Went 4-0 in singles during Valpo’s spring trip to Florida in March… Grabbed straight set Summit League wins on March 30 at Illinois State and April 20 vs. North Dakota… Only defeats in league play came in three sets as he fell in a traditional third set at Denver on Feb. 7 and a third-set tiebreak on April 6 vs. Drake… Ended the doubles portion of his season on a high note once he was paired with Brian Pecyna. The two enjoyed a 6-2 win over North Dakota at No. 2 doubles in the regular season finale on April 20 before helping Valpo take the doubles point with a 6-2 victory over Drake in the Summit League Tournament semifinals.

2017-18: Was the hero of Valpo’s dramatic 4-3 win over Denver in the Summit League semifinal, coming from 5-1 down to win six consecutive games and take a 3-6, 6-4, 7-5 victory at No. 6 singles, sending Valpo to its fourth consecutive league championship match… Went 4-1 in Summit League singles play, posting the best conference record on the team… Owned a 13-12 overall singles mark and a 10-9 doubles record… His only losses against Summit League opponents came against league champion Drake, including a tight 7-5, 2-6, 3-6 defeat in the league championship match. Won all five matches against non-Drake league foes, including the memorable tournament win against Denver… Had straight-set victories over Illinois State, Oral Roberts, Omaha and South Dakota State in the regular season, part of a six-match winning streak as he went over a month between losses.

2016-17: Member of a team that won the Horizon League regular season and tournament titles, set the school record for wins with 23 and appeared in the NCAA Tournament... Went 11-3 in singles and 9-5 in doubles competition... Won his first career singles match 7-5, 6-4 over Shaun Berman (Washington U in St. Louis) on Sept. 16 at the Duke James Bonk Invite... Made his Horizon League debut by playing No. 3 doubles with Garrett Gardner on April 8 at Northern Kentucky, a match that went unfinished... Was victorious in his only singles match of the spring season, a 6-1, 7-6 win over Marcel Ueltzhoffer at No. 5 singles on April 9 at Wright State.

Prep: A three-time 6A Oklahoma state singles champion, compiled a record of 121-5 during his high school career... Finished second at No. 2 singles as a high school freshman... Four-star recruit and Top 90 nationally, according to The Tennis Recruiting Network.... Oklahoma 6A 2015-2016 Tennis Player of the Year, Oklahoma All State selection 2016 and graduated as Oklahoma Academic Scholar.