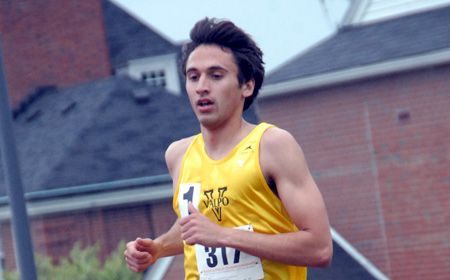 Senior Tom Heun (Brecksville, Ohio/Brecksville-Broadview Heights) ran to a second-place finish in the 55m hurdles Saturday at the Chicagoland Championships in Chicago, Ill. to lead the Valparaiso men’s track and field squad.

The Crusaders totaled 15 points on the meet, finishing 13th out of the 20 competing teams.  The University of Chicago, which hosted the event, captured the team championship with 110 points.

Heun moved into Valpo’s all-time top-five in the 55m hurdles with his effort in the preliminaries, registering a time of 8.06 seconds to qualify for the finals.  He then slashed over two-tenths of a second from his time in the finals, crossing the line in 7.84 seconds to finish in second place with the fourth-best time in school history.

On the infield, Nick Babbitt (Glendale, Wis./Nicolet) tallied a ninth-place showing in the weight throw, registering a toss of 48’2 ½”.  Steve Schubert (Lisle, Ill./Benet Academy) recorded a ninth-place finish of his own, leaping 40’9” in the triple jump for his top-ten placement.

The Crusaders return to the track next Saturday at the Boilermaker Invitational in West Lafayette, Ind.  The first event is scheduled to begin at 10 a.m. CST.