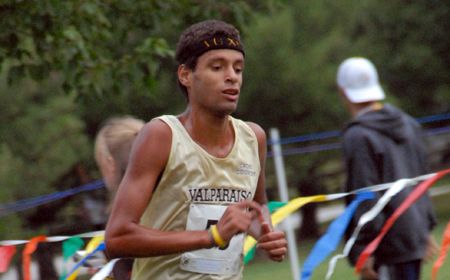 Leandro Schultz (Valley View, Ohio/Brecksville-Broadview Heights) ran to a fourth-place finish in the 5,000m run, while Chris Walsh (Pittsboro, N.C./Cary Academy) finished in fourth position in the decathlon as the Valparaiso men’s track and field squad competed Saturday at the Chicagoland Championships in Chicago, Ill.

The Crusaders totaled 15 points for the meet, good for 15th place among the 20 competing schools.  North Central College won the team title with 175.5 points.

Schultz posted one of Valpo’s all-time fastest times in the 5,000m run for his fourth place finish, crossing the line in 15:01.22, just seven seconds behind the race winner.  The time was the fourth-fastest by a Crusader in program history, meaning Schultz now ranks among Valpo’s all-time top-five in both the 5K and 10K.

Walsh finished the decathlon with 4,731 points, less than 300 points out of third place and the fourth-highest total in the ten-event multi by a Crusader all-time.  Walsh’s best showings compared to the field came in the discus throw, javelin throw and 1,500m run, in which he finished second.  He accumulated the most points in the 100m dash, completing the race in 11.77 seconds, netting himself 697 points.

Elsewhere on the infield, Vince Liuzzo (Jamestown, N.Y./Jamestown) led the way with a seventh-place finish in the javelin throw, registering a mark of 155’9”.  Steve Schubert (Lisle, Ill./Benet Academy) placed ninth in the triple jump, leaping 43’6”.  Bill Rixon (Deerfield, Ill./Deerfield) finished 13th in the discus throw, while Christopher Stohs (Shawnee, Kan./Shawnee Mission North) finished in the same spot in the hammer throw.  Valpo’s best individual finish on the track behind Schultz came courtesy of Joel Hartenberger (Albuquerque, N.M./Sandia), who ran to a 16th-place showing in the 10,000m run.

Valparaiso returns to the track next Saturday, April 18 at the Dave Rankin Invitational in West Lafayette, Ind.  The first event is slated for a 9 a.m. CDT start.