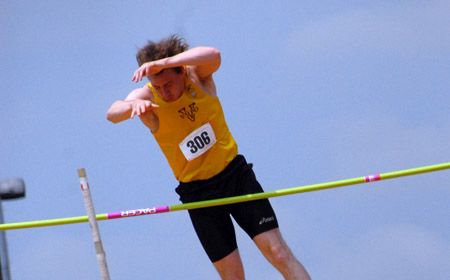 Tom Heun (Brecksville, Ohio/Brecksville-Broadview Heights) led the Valparaiso men’s track and field team with a fifth-place finish in the 110m hurdles as the Crusaders concluded the 2009 Horizon League Outdoor Track and Field Championships Sunday in Lisle, Ill. in seventh place.

Heun cut six-tenths of a second off of his qualifying time in the 110m hurdles, crossing the line Sunday in 15.54 seconds for his fifth-place showing.  Other top performances on the track Sunday came from Rich Krupar (Elyria, Ohio/Midview), who placed tenth in the 1,500m run with a season-best time of 4:07.56, and Jordan Piaskowy (Crete, Ill./Illiana Christian), who paced the Crusaders in the 5,000m run with a time of 15:59.96.

On the infield, Philip Lohrmann (Battle Ground, Wash./Battle Ground [Clark C.C.]) and Christopher Stohs (Shawnee, Kan./Shawnee Mission North) each registered seventh-place finishes on Sunday.  Lohrmann placed seventh in the pole vault, clearing 13’7 ¼”, while Stohs registered his finish in the shot put with a toss of 41’5”.  Steve Schubert (Lisle, Ill./Benet Academy) also picked up a ninth-place showing in the triple jump with a leap of 42’11 ¾”.

While the season is over for most of the Crusaders, Brett Maynard (Pawcatuck, Conn./Stonington) will compete in the NCAA Mideast Regional, to be held in Louisville, Ky. on May 29-30.  Maynard qualified for the regional meet by virtue of his event victory Saturday in the javelin throw.