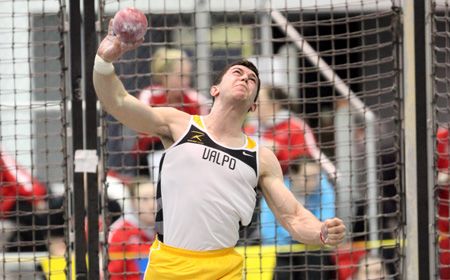 The throws provided the Crusaders with five top-tens on Sunday.  Nick Babbitt (Milwaukee, Wis./Nicolet) earned a podium finish in the hammer throw with a toss of 167’2”, good for third place and the third-best effort in the event in Valpo history.  Bill Rixon (Deerfield, Ill./Deerfield) and Andrew Rixon (Deerfield, Ill./Deerfield) finished eighth and tenth, respectively, in the hammer with efforts of 148’10” and 137’4”.  The latter Rixon also placed eighth in the shot put with a mark of 41’4 ½”, while Ronnie Fredericks (Baltimore, Md./Gilman School) finished tenth in the event with a mark of 36’11”.

Also in the infield, Valpo picked up two top-tens in the triple jump.  Jarrett Mickens (Aurora, Ill./Waubonsie Valley) came up just short of the podium, placing fourth with a leap of 46’2” and Steve Schubert (Lisle, Ill./Benet Academy) recorded a jump of 44’3 ¼”, good for eighth place.

On the track, Mike Kash (Woodridge, Ill./Lemont Township) earned top-ten finishes in both hurdle events after qualifying for both event finals on Saturday.  Kash ran a season-best time of 57.27 seconds in the 400m hurdles, good for seventh place and coming up just three one-hundredths of a second shy of Valpo’s all-time top-five.  The freshman also placed ninth in the 110m hurdles, crossing the line in 16.88 seconds.  Also leading Valpo runners on Sunday were Jordan Piaskowy (Crete, Ill./Illiana Christian) in the 5,000m run, finishing 11th with a time of 15:38.71, and David Carter (Arlington Heights, Ill./John Hersey) in the 1,500m run, which he ran in 4:09.03 to place 17th.

The league championship meet concludes Valparaiso’s 2010 season as a complete squad.  Individuals who have a chance to earn invitations to the 2010 NCAA Regionals will learn if they will be moving on within the next couple weeks.