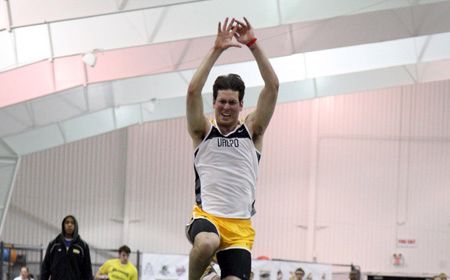 Freshman Julian Smith (Chicago, Ill./Brother Rice) set a new program record in the 60m dash on Saturday as the Valparaiso men’s track and field team completed its final preparations for next week’s league championship meet by competing at the Boilermaker Invitational in West Lafayette, Ind.

Smith qualified for the event finals in the 60m dash with a time of 6.97 seconds, matching his season best up to that point.  He then ran a 6.91 in the finals, good for a second-place finish and surpassing Elliot Powell’s 2005 record of 6.94 seconds.  Smith also ended the day with an event victory, taking top honors in the 200m dash after crossing the line in 22.45 seconds.

A number of other Crusader runners also had solid performances on Saturday.  Sophomore Wally Bradford (Mukwonago, Wis./Mukwonago) set a new PR in the one mile run with a time of 4:24.08, good for a runner-up placement.  Senior Joel Hartenberger (Albuquerque, N.M./Sandia) ran to an eighth-place finish in the 3,000m run, crossing the line in 9:13.15, while freshman Joe Holy (Bolingbrook, Ill./Joliet Catholic) finished tenth in the 200m dash with a time of 23.61 seconds.

A trio of Valpo runners placed among the top-ten in the 800m run as well.  Junior Derek Schnake (Chicago, Ill./Lincoln Park) led the Crusader contingent in the event with a time of 2:00.95, good for fifth place.  Senior David Carter (Arlington Heights, Ill./John Hersey) stopped the clock at 2:01.56 to place eighth, while junior Keith Button (Farmington Hills, Mich./Farmington) finished right behind Carter, crossing the line in 2:05.10.

Senior Jarrett Mickens (Aurora, Ill./Waubonsie Valley) continued his standout season in the jumps, winning the long jump Saturday with a leap of 23’5 ¼”.  Senior Steve Schubert (Naperville, Ill./Benet Academy) also earned a victory, his coming in the triple jump thanks to a mark of 44’1 ¼”, while sophomore Chris Hovan (Elkhart, Ind./Elkhart Christian) placed second with a jump of 41’8”.

Valparaiso has been tuning up all season for the 2011 Horizon League Indoor Track and Field Championships, to be contested next Saturday and Sunday, February 26 and 27 in Geneva, Ohio.  The two-day meet begins on the 27th at 8 a.m. CST.