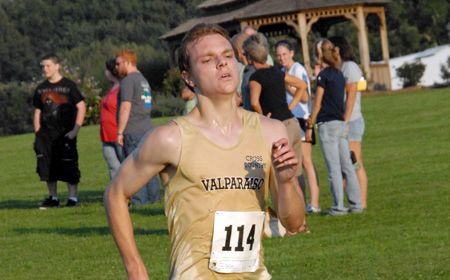 The Valparaiso men’s track and field squad opened the 2011 outdoor campaign Saturday afternoon at the Polar Bear Invitational in Marion, Ind., hosted by Indiana Wesleyan University, with a solid showing, highlighted by a pair of individual event victories.

On the track, sophomore Wally Bradford (Mukwonago, Wis./Mukwonago) took top honors in the 1,500m run, crossing the line in 4:18.09, edging out his closest competitor by just over one-half second for the victory.  Meanwhile in the infield, senior Steve Schubert (Naperville, Ill./Benet Academy) captured the top spot in the triple jump, leaping 41’1 ½” for the win.

Three other Crusaders joined Bradford within the top-10 in the 1,500m race, led by senior David Carter (Arlington Heights, Ill./John Hersey), who placed fifth with a time of 4:23.47.  Junior Derek Schnake (Chicago, Ill./Lincoln Park) ran the race in 4:29.92, good for ninth place, while sophomore Joe Johnson (Darien, Ill./Downers Grove South) finished right behind Schnake, crossing the line in 4:32.00.  Bradford and Carter also finished fifth and ninth, respectively, in the 800m run, posting times of 2:01.01 and 2:06.84.

On the infield, redshirt sophomore Chris Hovan (Elkhart, Ind./Elkhart Christian) joined Schubert with a podium finish in the triple jump, leaping 40’3 ¼” for a third-place finish.  Senior Jarrett Mickens (Aurora, Ill./Waubonsie Valley) only competed in the long jump Saturday, earning runner-up placement in that event thanks to a leap of 21’9”.  Schubert also picked up an eighth-place finish in the javelin throw with a toss of 139’8”, while junior Bill Rixon (Deerfield, Ill./Deerfield) finished sixth and eighth in the discus and hammer throws, respectively, with throws of 140’8” in the discus and 145’6” in the hammer.

Valparaiso returns to action next Saturday, April 2, at the DePauw Invitational in Greencastle, Ind.  The meet is slated for a 10:30 a.m. CDT start.