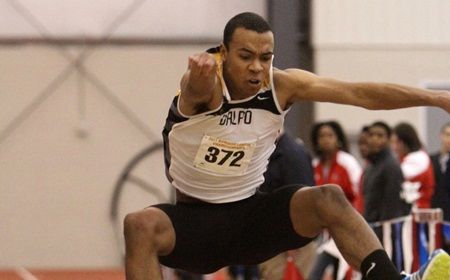 The Valparaiso men's track and field team sits in fourth place after the second of three days of action on Saturday at the 2011 Horizon League Outdoor Championships in Indianapolis, Ind.

The Crusaders have tallied 21 points through two days of competition, just 12 points behind third-place Butler.  Milwaukee paces the team standings with 103 points.

Freshman Julian Smith (Chicago, Ill./Brother Rice) had a standout all-around day for the Crusaders on Saturday.  Smith was the fastest qualifier for Sunday's event finals in the 200m dash, running a time of 21.55 seconds, third-fastest in Valpo history in the event.  Smith also qualified for the finals in the 100m dash with a time of 10.93 seconds, the fourth-fastest in the preliminaries.  On the infield, Smith, competing for the first time in the long jump outdoors, leapt 22'4 1/4”, good for a fourth-place finish.

Smith was one of three Crusaders to post top-11 finishes in the long jump on Saturday.  Senior Jarrett Mickens (Aurora, Ill./Waubonsie Valley) came up just one-half inch short of his PR and school record in the event, jumping 24'1 3/4”, good for a second-place finish.  Meanwhile, sophomore Chris Hovan (Elkhart, Ind./Elkhart Christian) also set a new PR in the event, placing 11th with a leap of 19'5 1/2”.

A number of other Crusaders also set PRs on the infield Saturday.  Junior Bill Rixon (Deerfield, Ill./Deerfield) earned a podium finish in the hammer throw with a toss of 168'9”, good for third place and the third-best mark in Valpo history in the event, less than a foot shy of the second-best mark.  Freshman Sean Carey (Lockport, Ill./Lockport Township) cleared 13'5 1/4” in the pole vault, less than two inches off the Crusaders' all-time top-five and good for eighth place, while freshman Chad Henkel (Sublette, Ill./Amboy) finished seventh in the javelin throw with a mark of 118'0”.

On the track, junior Jordan Piaskowy (Crete, Ill./Illiana Christian) ran to an 11th-place finish in the 3,000m steeplechase, covering the course in 10:15.04.  Sophomore Wally Bradford (Mukwonago, Wis./Mukwonago) led the Valpo contingent in the 800m run with a time of 1:57.26, a PR and the fastest by any Crusader this season, but failed to qualify for Sunday's event final.  Freshman Mickey Delcambre (Westfield, Ind./Westfield) also represented Valpo in the 400m dash, but failed to qualify for the event final.