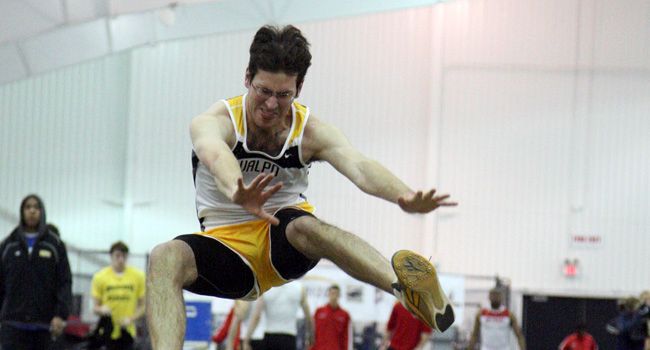 Senior Chris Bednarczyk (Westfield, Ind./Westfield) earns the accolade after ranking fourth among the Crusader men in the 5K during the outdoor season, running a top time of 16:36.13.  Bednarczyk, now a three-time Academic All-League honoree, carried a 3.931 cumulative GPA as a meteorology major.  He has earned Valpo Presidential academic honors and been named to the Horizon League Academic Honor Roll each semester eligible.

Senior Joel Hartenberger (Albuquerque, N.M./Sandia) earns his first career Academic All-League honor after pacing the Crusaders during the outdoor campaign in the 10K, running a best time of 33:08.35.  The senior, who also ranked third on the team in both the 1,500m run and the 5K, placed 14th at the league’s outdoor championship meet in the 10K.  Hartenberger, who carried a 3.538 cumulative GPA as a mechanical engineering major, earned Valpo Presidential academic honors and was named to the Horizon League Academic Honor Roll each semester eligible.

Sophomore Joe Johnson (Darien, Ill./Downers Grove South) receives his first Academic All-League commendation after an outdoor season in which he ranked second among Valpo runners in the 5K, with a top time of 16:15.41, and fourth in the 1,500m run.  Johnson, who holds a 3.704 cumulative GPA as an accounting major, has earned Valpo Presidential academic honors and been named to the Horizon League Academic Honor Roll each semester eligible.

Senior Jarrett Mickens (Aurora, Ill./Waubonsie Valley) earns Academic All-League recognition for the fourth time after a stellar conclusion to his collegiate career.  Mickens was a two-time HL Male Field Athlete of the Week during the outdoor campaign, and earned podium finishes in both the long and triple jumps at the league’s outdoor championships.  He also set a school record of 24’6 ½” outdoors in the long jump, earning a spot at the NCAA East Preliminary Round, where he placed 27th.  Mickens, a member of the Capital One Academic All-District V Track and Field/Cross Country First Team, carried a 3.672 cumulative GPA as a biology major and was the league’s Male Scholar-Athlete of the Month in January 2011.

Senior Steve Schubert (Naperville, Ill./Benet Academy) received the league’s academic honor for the sixth time after ranking second among Crusader athletes in both the triple jump and the javelin throw during the outdoor season, moving into fourth on Valpo’s all-time chart in the former event with a leap of 45’9”.  The senior placed fifth at the league’s outdoor championship meet in the javelin throw and eighth in the triple jump.  Also a member of the Capital One Academic All-District V Track and Field/Cross Country First Team, Schubert carried a 3.807 cumulative GPA as a civil engineering major.