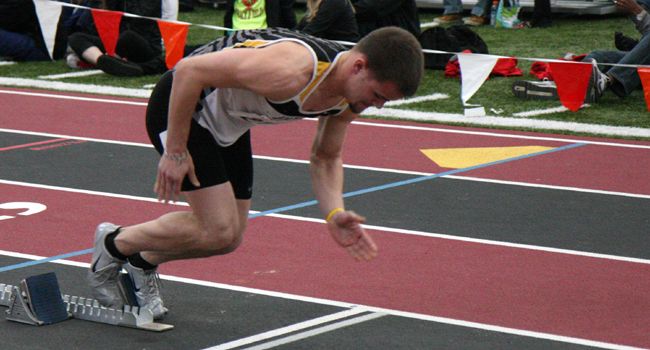 The Valparaiso men's track and field team continued the 2012 outdoor campaign on Saturday at the DePauw Invitational in Greencastle, Ind., finishing the meet in third place.

The Crusaders tallied 121 points on the day, good for third place out of the nine competing schools. Wabash took home top team honors with 186 points.

A pair of Valpo relay squads cracked the Crusaders' all-time top-fives on Saturday. Valpo's 4x100m relay team covered the distance in a winning time of 42.58 seconds, good for third in Crusader history and the fastest-such relay in 29 years. Meanwhile, Valpo's 'A' team in the 4x400m relay crossed the line in fourth place with a time of 3:22.70, matching the third-fastest effort in the event all-time at Valpo.

Sophomore Julian Smith (Chicago, Ill./Brother Rice) and freshman Nick Kowaleski (Lockbourne, Ohio/Grove City) combined for a pair of 1-2 finishes in the sprints as well. The duo took the top two spots in the 100m dash with respective times of 10.85 and 10.99 seconds, and also finished 1-2 in the 200m dash, covering the distance in 21.94 and 22.29 seconds. Freshman Kevin Adamik (Elmhurst, Ill./York Community) earned a fourth-place finish Saturday in the 400m hurdles with a time of 57.63 seconds, while senior Nick Fagan (Sycamore, Ill./Sycamore) crossed the line in the 5,000m run in 16:07.67, good for second place.

On the infield, the Crusaders boasted a pair of top-five finishers in the javelin throw. Freshman Jeremy Getz took third place with a throw of 165'9”, while junior Andrew Rixon (Deerfield, Ill./Deerfield) recorded a mark of 152'6” to finish in fifth place. Senior Bill Rixon (Deerfield, Ill./Deerfield) picked up a pair of top-fives on Saturday, finishing third in the discus throw (143'6”) and fourth in the hammer throw (154'6”). Valpo also had two finishers within the top-four in the triple jump, as freshman Cy Badertscher (Janesville, Wis./Joseph A. Craig) leapt 41'8 3/4” to finish in third place and senior Chris Hovan (Elkhart, Ind./Elkhart Christian) placed right behind Badertscher in fourth by jumping 41'3 1/4”.