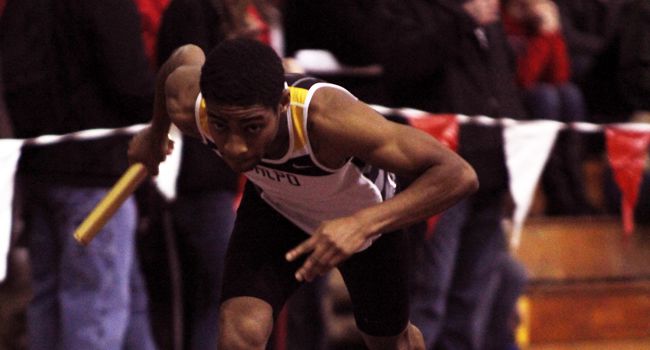 The Crusaders totaled 66 points over the three-day meet to finish in fifth place, closing the meet just seven points out of fourth place.  Milwaukee tallied 175 points to earn the team championship.

Smith and Kowaleski both sprinted past the previous HL Outdoor championship meet record time of 10.62 seconds, set in 2003.  Smith earned the victory with a time of 10.56 seconds, while Kowaleski was just a tick slower, crossing the line in 10.59 seconds to close the 1-2 finish.  Then, in the 200m dash, Smith dusted the field, winning by more than four-tenths of a second with a time of 21.41 seconds.  Kowaleski came home fourth in the same event, covering the 200m in 21.95 seconds.

The duo also served as one-half of the Crusaders’ 4x100m relay squad which earned a podium finish as well.  Freshman Ricky Laskowski (Dixon, Ill./Dixon) and sophomore Joe Holy (Bolingbrook, Ill./Joliet Catholic) joined Kowaleski and Smith to complete the race in 41.89 seconds and finish in third place.  The other scheduled relay event, the 4x400m, was canceled due to inclement weather at the meet’s end.

Elsewhere on the track, freshman Kevin Adamik (Elmhurst, Ill./York Community) registered an eighth-place finish in the 400m dash with a time of 50.12 seconds.  Laskowski added an eighth-place finish of his own in the 400m hurdles, running it in 58.97 seconds.  Freshman Eric Loria (Crystal Lake, Ill./Central) paced the Valpo contingent in the 1,500m run, crossing the line in 4:12.14, while senior Nick Fagan (Sycamore, Ill./Sycamore) led the Crusader runners in the 5,000m run by finishing in 14th place with a time of 15:47.50.

Valpo’s efforts on the infield on Sunday were led by the Rixon brothers.  Senior Bill Rixon (Deerfield, Ill./Deerfield) picked up the Crusaders’ best infield finish of the weekend, as his toss of 157’2” was good for a second-place finish.  Rixon’s mark set a new PR in the event and also improved upon his second-best mark in Valpo history.  Meanwhile, junior Andrew Rixon (Deerfield, Ill./Deerfield) finished on the podium as well, placing third in the shot put with a mark of 49’3 ½”, the fifth-best effort in the event all-time at Valpo.

The Crusaders earned two top-ten finishes in each of the aforementioned throws.  Bill Rixon was joined in the top-10 of the discus by freshman Jacob Frey (St. Paul, Minn./Roseville Area), as the rookie unleashed a season-best throw of 145’2” to place eighth.  Sophomore David Goad (Dixon, Ill./Dixon) registered a tenth-place finish in the shot put with a toss of 42’11 ½”.  Freshman Cy Badertscher (Janesville, Wis./Joseph A. Craig) earned a fourth-place finish of his own in the triple jump with a leap of 43’7 ¼”.