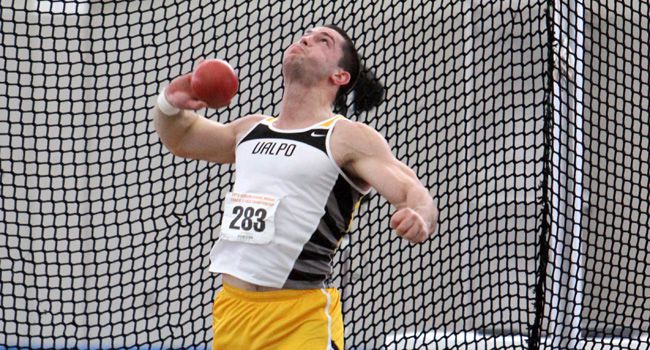 Andrew Rixon had a pair of top-three finishes at the Gene and Rose Edmonds Invitational.
Related Links

The Valparaiso men’s track and field team started the outdoor season off on the right foot by having seven first place finishes at the Gene and Rose Edmonds Invitational held in Rensselaer, Ind. on Saturday afternoon.

Sophomore Jacob Frey (St. Paul, Minn./Roseville Area) was a double-winner for the Crusaders. He took the hammer throw with a distance of 163’3”, and his mark of 141’7” was also good enough for the win. Frey also took fifth in the shot put with a best distance of 38’6 ¾”.

On the track, Michael Salguero (Ebensburg, Pa./Central Cambria) led a pack of Crusaders in the win in the 1500-meter run. Salguero crossed the line with a time of 4:20.80.

Freshman Antown Hatchett (Indianapolis, Ind./Warren Central) topped the field in the 400-meter dash with a time of 52.46 seconds. Freshman Chad Brooks was second with a time of 53.06.

The Crusaders return to action on Friday, Mar. 29 on day one of the Mike Poehlein Invitation in West Lafayette, Ind.