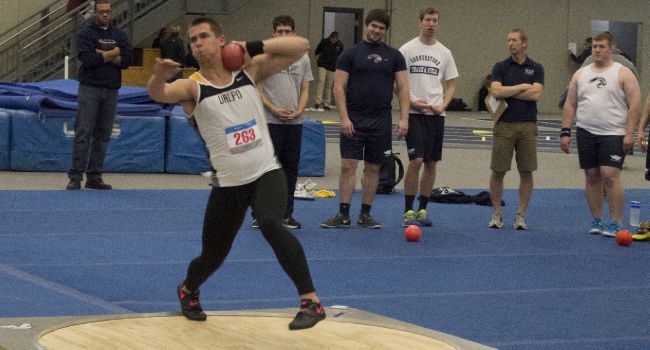 On Friday, Jacob Frey and Jacob Smutz saw action at the Meyo Invitational, held at the University of Notre Dame. Competing in the finals for the weight throw, Frey posted a distance of 49’7”, while Smutz cleared 49’1”. Valparaiso also took part in the Windy City Invitational on Saturday. The Crusaders were able to post three first-place and several top-five finishes at the meet.

Kevin Adamik topped all competition in the 55-meter hurdlers, finishing with a top time of 8.27.

Andrew Butt led the Crusaders in the 400-meter dash, crossing the finish line in 52.35 for a third-place finish.

In the 1-mile run, Adam Bruno’s season high mark of 4:26.53 was good enough for third overall; just a second behind the runner-up.

Trace Ostergren took fourth in the 3,000-meter run with a time of 9:02.58; just two-hundredths of a second out from a top-three finish.

After competing in the weight throw at the Meyo on Friday, Frey was able to capture a first-place finish in the same event on Saturday, clearing 54’7 ½”. Smutz wasn’t far off of Frey’s mark, claiming second-place at 53’7 ½”. Frey also finished second in the shot put with a season-high mark of 43’4 ½”.

Up next for the Crusaders is the Purdue Invitational in West Lafayette, Ind. The meet will take place on Saturday February 15th.